Items related to America's Response to China: A History of Sino-American...

Cohen, Warren I America's Response to China: A History of Sino-American Relations

America's Response to China: A History of Sino-American Relations 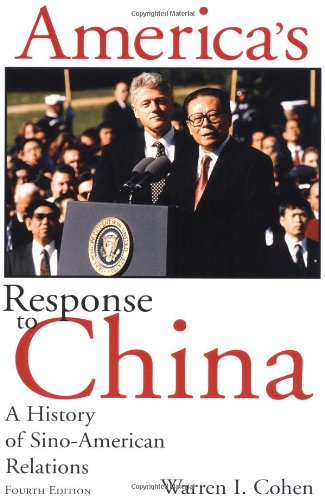 Given the many important developments in Sino-American relations in the past decade, there is a desperate need for a succinct, historically grounded assessment of the increasingly contentious and complicated relationship between these two giants of the world stage. This classic text by one of America's leading diplomatic historians analyzes the concerns and conceptions that have shaped U.S.--China policy -- as well as of their important consequences. In its first three editions, America's Response to China set the standard for introductions to this important topic. This 4th Edition is the most up-to-date work on the subject. Starting with a discussion of the mercantile interests of the newly independent American colonies and ranging through the dramatic causes and effects of the Tiananmen Square Massacre, America's Response to China, 4th Edition continues into the Bush and Clinton years, utilizing material available only in the last five to ten years. With equal parts trenchant analysis and insightful synthesis, Warren I. Cohen provides an excellent summary of U.S.--China relations on the eve of the twenty-first century.

Warren Cohen... [is] the leading historian of Sino-American relations of his generation. This book has much to offer both newcomers to its subject as well as those who have been studying relations between these two countries nearly as long as its author. -- Steven I. Levine American Diplomacy A fresh new look at the history of United States diplomacy towards China...The subject will never be the same again. -- John King Fairbank American Political Science Review

Warren I. Cohen is Distinguished University Professor of in the Department of History at University of Maryland Baltimore County and Senior Scholar at the Woodrow Wilson International Center for Scholars. Among his many books are five others published by Columbia, including East Asian Art and American Culture (1992).