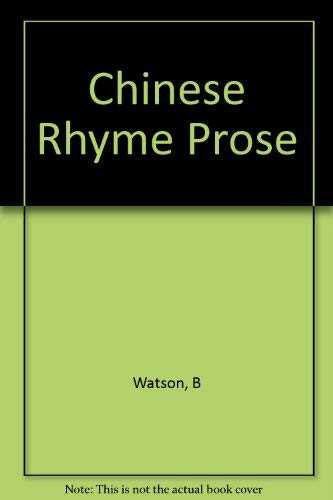 The fu, or rhyme-prose, is a major poetic form in Chinese literature, most popular between the 2nd century b.c. and 6th century a.d. Unlike what is usually considered Chinese poetry, it is a hybrid of prose and rhymed verse, more expansive than the condensed lyrics, verging on what might be called Whitmanesque. The thirteen long poems included here are descriptions of and meditations on such subjects as mountains and abandoned cities, the sea and the wind, owls and goddesses, partings and the idle life.

Burton Watson is universally considered the foremost English-language translator of classical Chinese and Japanese literature for the past five decades. Gary Snyder calls him a “great and graceful scholar,” and Robert Aitken has written that “Burton Watson is a superb translator because he knows what literature is.” Here his seemingly effortless translations are accompanied by a comprehensive introduction to the development and characteristics of the fu form, as well as excerpts from contemporary commentary on the genre. A path-breaking study of pre-modern Chinese literature and an essential volume for poetry readers, the book has been out of print for decades. For this edition, Lucas Klein has provided a preface that considers both the fu form and Watson’s extraordinary work as a whole.

To translate the fu into English is by no means an easy task, and Professor Watson should be congratulated on his commendable achievement in handling these difficult and recondite materials....The translations as a whole are both accurate and enjoyably readable.

Burton Watson’s lifelong dedication to Chinese literature [is] a gift to us all.

His erudition, his deep familiarity with and his evident love of the source, and the delicacy and precision of his own English have given us an invaluable body of renderings from the vast tradition of Chinese poetry.

Burton Watson is a superb translator because he knows what literature is.

(Robert Aitken) About the Author:

BURTON WATSON iis the foremost English-language translator of classical Chinese and Japanese literature. Among his many books are individual translated volumes of the poets Tu Fu, Su Tung-p’o, Han Shan, Lu Yu, Po Chü-yi, Gensei, and Ryōkan; the philosophers Chuang Tzu, Confucius, Mencius, Mo Tzu, Hsün Tzu, and Han Fei Tzu; the historian Ssu-ma Ch’ien; and Buddhist texts such as The Lotus Sutra and The Vimalakirti Sutra. He is the editor and translator of The Columbia Book of Chinese Poetry and, with Hiroaki Sato, of a prolific anthology of Japanese poetry, From the Country of Eight Islands. He received the Gold Medal Award presented by the Translation Center at Columbia University in 1979 and the PEN Translation Prize twice, in 1981 and 1995. He lives in Japan.

LUCAS KLEIN’s translations include Notes on the Mosquito: Selected Poems by Xi Chuan, which won the Lucien Stryk Asian Translation Prize from the American Literary Translators Association. He lives in Hong Kong.

1. Chinese Rhyme-Prose, poems in the FU form from the Han and Six Dynasties periods

Book Description Columbia University Press 1964-10-01, 1964. Paperback. Condition: Fine. Item is in like new condition with minor shelf wear. Might have a remainder mark or slight wear from sitting on the shelf. Seller Inventory # DS-0231035543-1

5. Chinese Rhyme Prose. Poems in the Fu Form from the Han and Six Dynasties Periods