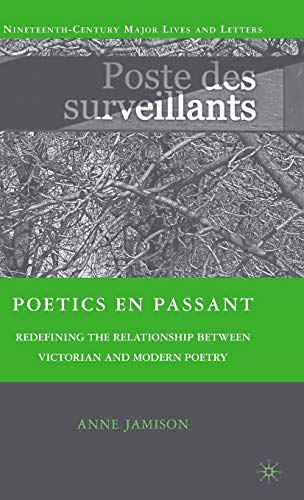 Poetics en Passant presents a "cross-channel" poetics that redefines the relationship between "Victorian" and "modern" poetry by understanding Christina Rossetti's poetics of "stealth" as an important counterpart to Baudelairean "shock."

"In her important new book Poetics en Passant: Redefining the Relationship between Victorian and Modern Poetry

Jamison expertly reads Charles Baudelaire and Christina Rossetti to show that the categories 'Victorian' and 'Modern' make little to no chronological sense. A true comparatist, Jamison argues that the two contemporaries - one considered the first modern and the other considered an always-outdated Victorian poetess - both rebel against (and alter) literary convention through what she calls 'shock' and 'stealth,' or a poetics of transgression." - Victorian Studies

"Poetics en passant: Redefining the Relationship between Victorian and Modern Poetry is a lively, provocative book. Anne Jamison has unusual gifts as a close-reader, and her prose is as sharp as her analysis." - Wordsworth Circle

"Modernist Christina Rossetti - the devout Victorian spinster poetess? Victorian Charles Baudelaire - the transgressive French poète maudit? Yes and yes, you will finally agree, after taking in Anne Jamison's witty and imaginative revisionary analysis of nineteenth-century cross-Channel poetics. Poetics en passant not only offers an unexpectedly fresh view of these strange bedfellows, Rossetti and Baudelaire, but demands a rethinking of the relations between French and British poetry of the nineteenth century, on the one hand, and between nineteenth-century and Modernist poetry, on the other. From the poetics of stealth and the transgression of 'sneaking' to corpse poems to goblin metrics, this work makes good on the promise of the 'new formalism' to reinvigorate the scholarship of nineteenth-century poetry." - Ivan Kreilkamp, Department of English, Indiana University and co-editor, Victorian Studies

"From a 'Victorian' Baudelaire to a 'Modernist' Rossetti, from Baudelaire's 'prose combat' to the 'sneak attack' of Rossetti's poetry, from the French prosody of the prose poem to the fancy prosody of 'Goblin Metrics,' Poetics en passant offers much more than a passing pleasure: a shock of recognition. Jamison shows how to recognize a nineteenth-century poetics of transgression, and how to read cross-channel poetics in England and France more transgressively, more comparatively, more imaginatively. She reads through but also beyond Baudelaire and Rossetti, offering a brilliant analysis of poetic forms that perform the reversals and inversions of Victorian verse." - Yopie Prins, Associate Professor, English and Comparative Literature and Department Chair, Comparative Literature, University of Michigan