Items related to The Epitome of Evil: Hitler in American Fiction, 1939-2002 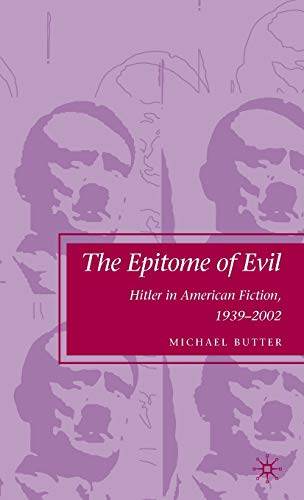 This groundbreaking study argues the figure of Adolf Hitler has become a powerful trope in American culture and explores the implications of this original argument. Focusing on fictional texts that feature Hitler as a character, but taking film and political discourse into account as well, The Epitome of Evil traces the trope's shifting cultural work from World War II to the 'war on terror.' This analysis centers on the proliferation of the use of Hitler in art since 1968 and the transformation from a means of left-wing critique into a rhetorical device of right-wing politics.

"In this captivating book, Butter provides an astoundingly original blend of close readings and historical analyses and produces a truly illuminating account of Hitler and his many appearances in American culture. Representing the best in cultural studies, The Epitome of Evil is both attentive to the past and sharply critical of how present formulations have emerged from and through that history. Pithy, pointed, and smart, Butter s text is filled with insightful observations that will open new and exciting avenues in American and cultural studies." - Priscilla L. Walton, Carleton University

"Much of the value and originality of Butter s thesis lies in its critique of postwar and contemporary American culture; however, Butter s analysis does not remain exclusively on this larger analytical level. He skillfully alternates between close textual readings and the more comprehensive cultural implications of the Hitler texts. Butter employs some of the most effective tools of contemporary narratology to demonstrate how each text constructs its own version of the Hitler trope and to analyze how certain generic forms (such as the alternate history) have developed precisely around representations of Hitler." - Erin McGlothlin, Associate Professor of German and Jewish Studies, Washington University in St. Louis