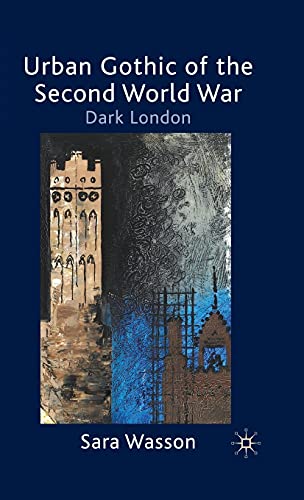 This book examines 'home front' literature of the Second World War, arguing that Gothic tropes and forms mark moments of fracture in the national mythologies of wartime home, city and fellowship. These works in the Gothic mode subvert mythologies of nation that are still influential today. Anna Kavan, Mervyn Peake, Elizabeth Bowen, Roy Fuller, Henry Green and others present counter-stories to the dominant national mythology of British survival and emotional resilience. In the texts of this monograph, the city grows strange, time distorts, and hallucinatory narrative voices depict a nightmare realm.

Doubling, temporal dislocation, narrative disjunction and tropes of haunting gather around shadowy figures on the margin of the nation. This book moves from city streets, to hospitals and prisons, to factories, to homes and finally to morgues. Each location presents a London that is, in the words of Mervyn Peake, "half masonry, half pain."

Winner of the Allan Lloyd Smith Memorial prize for advancing the field of Gothic Studies,2009-2011.

'By bringing together work on Gothic and recent studies of nation and memory, the book makes an important contribution to the understanding of how Gothic inscribes experience not comfortably accommodated by the dominant myth of Londoners' heroic response to the Blitz.' - Suz Zlosnik, Professor of Gothic Literature, Manchester Metropolitan University, UK

'..Wasson has achieved what a sound critical study aims to ...original, informed and challening...consistently written...' - Gothic

'highly readable and intellectually engaging. .... an original, informed and challenging analysis of many artists of World War II London. Her book is disturbingly pertinent to the cultural discussion of the many national and global disasters that have occurred in the past decade and which are consistently written into patriotic national narratives of heroism and healing.' - Honora Wilson, University of Edinburgh, Gothic Imagination

'Dr Wasson has made an inspired choice of writers and artists, among them Anna Kavan, Mervyn Peake, Elizabeth Bowen, Henry Green, Ann Ridler, and John Piper, and her readings of them are original and persuasive. This memorable book stands out as learned yet provocative, judicious yet passionately committed to its subject.' - Professor Laurence Davies, University of Glasgow, UK

'Sara Wasson's 'Urban Gothic of the Second World War: Dark London' offers a very exciting take on the Gothic. Rooted in historical documents and evidence, it re-assesses writing of and about the Second World War in order to challenge powerful cultural myths (created and supported, in part, by contemporary propaganda) about the resilience and cheerfulness of the British during that period – about national identity, in fact. Using a range of fiction and poetry that has been little (or not at all) subjected to a Gothic critique, Wasson throws fresh light on work by authors such as Henry Green, Roy Fuller, Anna Kavan and Graham Greene, whose writing is little referenced in current Gothic criticism. She also challenges the way in which 'schools' of criticism, including that of the Gothic, can inadvertently foster cultural myopia. Wasson's use of unpublished archival material makes reading this book an intensely moving as well as intellectually stimulating experience.' - Avril Horner, Emeritus Professor of English, Kingston University, UK

'...a carefully researched and well-writtenmonograph on an interesting and important period of Britain's urban and literary history. While it may be of primary interest to scholars of Gothic studies, literary studies and historians of wartime London, it is a book which is clearly attuned to writers' experiences of London during the war, and urban historians, cultural geographers, and historical geographers interested in literary representations of London will get a lot out of this scholarly text.' - Dr. Peter Merriman, Urban Geography

'Sara Wasson's well-structured, innovative and scholarly dissection of the 'urban Gothic' of London in wartime Britain is one of a
number of cultural criticisms in America, Britain and France partly invigorated by the publication of Jacques Derrida's (1993)Specters of Marx...Wasson's is a rich text that ends with a powerful plea for a resistance to tidy closure and to political strategy that advocates mourning as a collective response to collective loss and pain.' - Heather Nunn, Psychoanalysis, Culture & Society

This book examines writing in the Gothic mode which subverts the dominant national narrative of the British home front, of heroic community in the face of the Blitz