Items related to The Curse of Cain: The Violent Legacy of Monotheism

Schwartz, Regina M. The Curse of Cain: The Violent Legacy of Monotheism

The Curse of Cain: The Violent Legacy of Monotheism 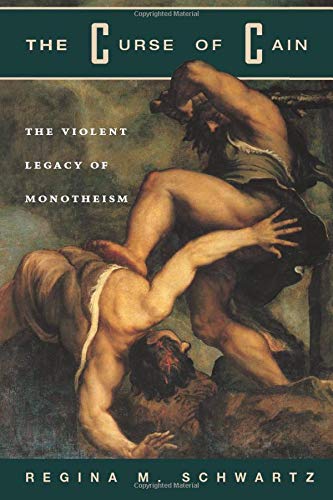 The Curse of Cain confronts the inherent ambiguities of biblical stories on many levels and, in the end, offers an alternative, inspiring reading of the Bible that is attentive to visions of plenitude rather than scarcity, and to an ethics based on generosity rather than violence.

"[A] provocative and timely examination of the interrelationship of monotheism and violence. . . . This is a refreshing alternative to criticism-biblical and otherwise-that so often confuses interpretation with closure; it is an invitation to an ethic of possibility, plenitude, and generosity, a welcome antidote to violence, as important for its insights into memory, identity, and place as for its criticism of monotheism's violent legacy."—Booklist

"Brilliant and provocative, this is a work demanding close attention from critics, theologians, and all those interested in the imaginative roots of common life."—Rowan Williams, Bishop of Monmouth

A murderer, an outcast, a man cursed by God and exiled from his people - Cain, the biblical killer of Abel, is a figure of utter disdain. But that disdain is curiously in evidence well before his brother's death, as God inexplicably refuses Cain's sacrifice while accepting Abel's. Cain kills in a rage of exclusion, yet it is God himself who has set the brothers apart. For Regina Schwartz, we ignore the dark side of the Bible to our peril. The perplexing story of Cain and Abel is emblematic of the tenacious influence of the Bible on secular notions of identity - notions that are all too often violently exclusionary, negatively defining "us" against "them" in ethnic, religious, racial, gender, and nationalistic terms. In this compelling work of cultural and biblical criticism, Schwartz contends that it is the very concept of monotheism and its jealous demand for exclusive allegiance - to one God, one Land, one Nation or one People - that informs the model of collective identity forged in violence, against the other. The Hebrew Bible is filled with narratives of division and exclusion, scarcity and competition, that erupt in violence. Once these narratives were appropriated and disseminated by western religious traditions, they came to pervade deep cultural assumptions about how collectives are imagined - with collective hatred, with collective degradation, and with collective abuse. Recovering the Bible's often misguided role as a handbook for politics and social thought, Schwartz demonstrates just how dangerous it can be.

Regina Schwartz examines the story of Cain and Abel, as she sees it - emblematic of a tenacious, tragic biblical influence over Western secular notions of identity - notions that are often violently exclusionary, negatively defining "us" against "them" in ethnic, religious, racial, gender and nationalistic terms. Shwartz contends that the very concept of monotheism and its paradigms of One-ness - the demand for exclusive allegiance to one God, one People, one Land or one Nation - infuse the model of collective identity founded in violence, against the other or outsider. Aiming to recover the Bible's role as a handbook for politics and social thought, this text seeks to demonstrate how dangerous this can be.