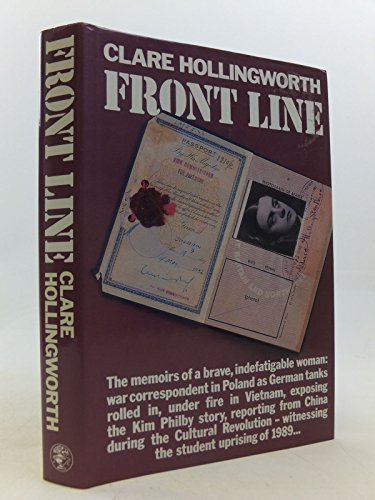 The memoirs of Clare Hollingworth, frontline reporter who worked on equal terms with men in a tough, dangerous profession. The book is being published 50 years after she sent back her first despatches from Poland as German tanks rolled in. She lived in Peking after the cultural revolution, and during the Algerian war she went alone into the dangerous Casbah in Algiers. She pursued and finally broke the story of Kim Philby when no one believed that he was the third man and had vanished to Russia.

Clare Hollingworth is an award-winning journalist. Her previous book was Mao and the Men Against Him (1985).

Buy Used
Condition: Good
Ships from the UK. Shows some signs... Learn more about this copy

Book Description Jonathan Cape, 1991. Condition: Good. 1St Edition. Ships from the UK. Shows some signs of wear, and may have some markings on the inside. Seller Inventory # GRP97638881

Book Description Hardback. Condition: Very Good. The book has been read, but is in excellent condition. Pages are intact and not marred by notes or highlighting. The spine remains undamaged. Seller Inventory # GOR001708334

Book Description Jonathan Cape 1991-02-01, 1991. Hardcover. Condition: Good. Item is in good condition. Some moderate creases and wear. This item may not come with CDs or additional parts including access codes for textbooks. Might be an ex-library copy and contain writing/highlighting. Seller Inventory # DS-0224028278-3