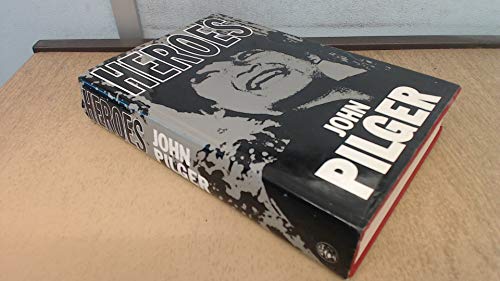 John Pilger has been in the rare position of having witnessed many of the major world upheavals of the past twenty years. More important, he has demonstrated his skill at conveying the atmosphere, and analyzing the nature, of both the great upheavals and domestic tragedies he has encountered as a journalist and film-maker. In Heroes, a book as compelling as it is revealing and uncompromising, he brings together the episodes for which his journalism is renowned. It is a vivid, engrossing and sometimes blackly amusing personal story and also a tribute to the many ordinary people he has witnessed coping with their lives in difficult and often brutal conditions. These are the 'heroes' of John Pilger's narrative. They are the Irish laboring generation f his great-great-great grandfather, who was transported in irons to Australia for 'uttering unlawful oaths', and the London scullery servant he met in a 'female factory' in Sydney where she hd been sent for life. They are the modern poor of Great Britain, whose hopes of a better life have been fostered, for political expediency, and then betrayed. They are the victims of conflicts in Vietnam, Cambodia, Africa, India, the Middle East and Central America; and those denied basic civil liberties in Czechoslovakia and the Soviet Union. By turns moving, ironic and angry, John Pilger's always compassionate book maintains a tight grip on the political significance of the events he describes. He identifies some of the silences of imperial history - the largely untold story of the Aborigines, for example. He shows how great powers declare small nations 'expendable' and also how the supposedly impartial language of the media, especial television, often reflects the propaganda of the dominant power. In Cambodia, whose suffering he brought to the attention of the world in 1979, he describes how external forces are today working to restore Pol Pot to power in another guise. John Pilger's research uncovers secrets kept, lies told and unpalatable facts suppressed. His four-year campaign on behalf of a forgotten group of the thalidomide children tells much about established power when it is rabged against the helpless victims of such a disaster. Above all, in Heroes he celebrates the human strengths of those who, far from succumbing to bitterness and despair, have still found room for generosity and humour. By recounting their triumphs, John Pilger demonstrates his conviction that fighting back against the injustices of war or tyranny or poverty is indeed possible.

"John Pilger is the antidote to easy, comfortable thinking, to smugness, to ignorance. He is necessary." --"Daily Telegraph "Pilger has a gift for finding the image, the instant, that reveals all. He is a photographer using words instead of a camera." --Salman Rushdie "From the Trade Paperback edition.

The bestselling book from one of the finest investigative journalists of our time.

Book Description Hardback. Condition: Good. The book has been read but remains in clean condition. All pages are intact and the cover is intact. Some minor wear to the spine. Seller Inventory # GOR001671375

Book Description Paperback. Condition: Very Good. The book has been read, but is in excellent condition. Pages are intact and not marred by notes or highlighting. The spine remains undamaged. Seller Inventory # GOR002374058

Book Description Jonathan Cape Ltd 29/05/1986, 1986. Hardcover. Condition: Very Good. Shipped within 24 hours from our UK warehouse. Clean, undamaged book with no damage to pages and minimal wear to the cover. Spine still tight, in very good condition. Remember if you are not happy, you are covered by our 100% money back guarantee. Seller Inventory # 6545-9780224023016

Book Description Jonathan Cape Ltd, 1986. Hardcover. Condition: Good. Ex-Library Book. Has usual library markings and stamps inside. All orders are dispatched the following working day from our UK warehouse. Established in 2004, we have over 500,000 books in stock. No quibble refund if not completely satisfied. Seller Inventory # mon0004304889

Book Description Jonathan Cape Ltd, 1986. Hardcover. Condition: Very Good. All orders are dispatched the following working day from our UK warehouse. Established in 2004, we have over 500,000 books in stock. No quibble refund if not completely satisfied. Seller Inventory # mon0004350206

Book Description -. Hardcover. Condition: Very Good. Heroes This book is in very good condition and will be shipped within 24 hours of ordering. The cover may have some limited signs of wear but the pages are clean, intact and the spine remains undamaged. This book has clearly been well maintained and looked after thus far. Money back guarantee if you are not satisfied. See all our books here, order more than 1 book and get discounted shipping. Seller Inventory # 7719-9780224023016

Book Description Jonathan Cape Ltd, 1986. Hardcover. Condition: Used; Good. **Simply Brit** Shipped with Premium postal service within 24 hours from the UK with impressive delivery time. We have dispatched from our book depository; items of good condition to over ten million satisfied customers worldwide. We are committed to providing you with reliable and efficient service at all times. Seller Inventory # 1237919

Book Description Jonathan Cape Ltd, 1986. Hardcover. Condition: Used; Good. **SHIPPED FROM UK** We believe you will be completely satisfied with our quick and reliable service. All orders are dispatched as swiftly as possible! Buy with confidence!. Seller Inventory # mon0001431322

Book Description Random House UK 1987-12-27, 1987. Hardcover. Condition: Good. Item is in good condition. Some moderate creases and wear. This item may not come with CDs or additional parts including access codes for textbooks. Might be an ex-library copy and contain writing/highlighting. Seller Inventory # DS-0224023012-3