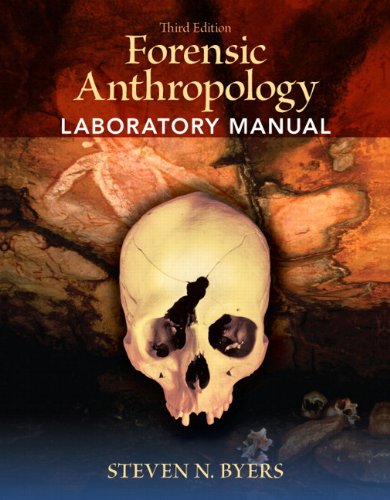 This unique, step-by-step workbook introduces students to all the procedures of the forensic anthropology protocol while providing even, balanced coverage of the core topics. Tear-out exercise worksheets reinforce the methodologies of forensic anthropology and enhance student comprehension. Each chapter contains detailed explanations of the terminology, osteological features, and measurements needed to understand each of the topics covered. Chapters may be covered in one session or multiple sessions and lists both basic and optional lab materials in chapter openers, enabling instructors to tailor each lab to the resources they have available.

Steve Byers received his B.A. and M.A. from Colorado State University in Ft. Collins, CO. His Master’s Thesis, entitled “A reconstruction of the skull of Gigantopithecus blacki”, formed the basis for YFX Studio's full reconstruction of Gigantopithecus on display at the San Diego Museum of Man. His first teaching job was at the University of Southern Colorado (now call Colorado State Universiy, Pueblo) where he taught Anthropology for two and a half years. From there, he worked as a social and psychological researcher until he decided that his true love was Anthropology. He enrolled at the University of New Mexico (UNM) in Albuquerque, NM, where he studied skeletal biology and bioarchaeology.

Since graduating in 1992, he has taught part-time at the various campuses of UNM as well as Santa Fe Community College. When given the opportunity to teach a forensic anthropology class at UNM in 1998, he realized that the field lacked a comprehensive textbook. Since no one appeared to be writing one, he decided to take on the project. The first edition of his textbook, published by Allyn and Bacon (since subsumed under Prentice Hall), appeared in 2002, and has been put into new editions three times. The book received a very favorable review in the Journal of Forensic Sciences, as well as several regional anthropology associations.