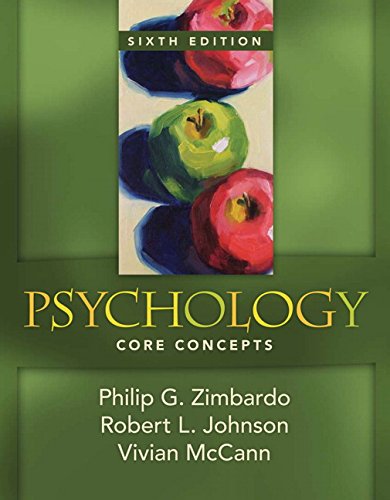 Psychology: Core Concepts represents the marriage of great science with great teaching--Applying the principles of psychology to the teaching of psychology.

Within this fourteen-chapter text, the authors focus on the core topics the majority of introductory psychology instructors cover―all while applying the principles of psychology to the teaching of psychology. Psychology: Core Concepts focuses on a manageable number of core concepts (usually three to five) in each chapter, allowing students to attain a deeper level of understanding of the material. Learning is reinforced through focused application and critical thinking activities, and connections between concepts are drawn across chapters to help students see the big picture of psychology as a whole. The 6th Edition features an enhanced critical thinking emphasis, with new chapter-opening "Problems" and new end-of-chapter critical thinking applications that promote more active learning of the content.

Philip Zimbardo is internationally recognized as the “voice and face of contemporary American psychology” through his widely seen PBS-TV series, Discovering Psychology, his classic research, The Stanford Prison Experiment, authoring the oldest current textbook in psychology, Psychology and Life, in its 18th Edition, and his popular trade books on Shyness in adults and in children; Shyness: What it is, what to do about it, and The Shy Child. Past president of the American Psychological Association, and the Western Psychological Association.

Zimbardo has been a Stanford University professor since 1968 (now an Emeritus Professor), having taught previously at Yale, NYU, and Columbia University. He is currently on the faculty of the Pacific Graduate School of Psychology, and the Naval Postgraduate School at Monterey, CA. He has been given numerous awards and honors as an educator, researcher, writer, and service to the profession. Recently, he was awarded the Vaclav Havel Foundation Prize for his lifetime of research on the human condition. His more than 300 professional publications and 50 books convey his research interests in the domain of social psychology, with a broad spread of interests from shyness to time perspective, madness, cults, political psychology, torture, terrorism, and evil.

Zimbardo has served also as the Chair of the Council of Scientific Society Presidents (CSSP) representing 63 scientific, math and technical associations (with 1.5 million members), and now is Chair of the Western Psychological Foundation. He heads a philanthropic foundation in his name to promote student education in his ancestral Sicilian towns. Zimbardo adds further to his retirement list activities: serving as the new executive director of a Stanford center on terrorism -- the Center for Interdisciplinary Policy, Education, and Research on Terrorism (CIPERT). He was an expert witness for one of the soldiers in the Abu Ghraib Prison abuses, and has studied the interrogation procedures used by the military in that and other prisons as well as by Greek and Brazilian police torturers.

Noted for his personal and professional efforts to actually 'give psychology away to the public', Zimbardo has also been a social-political activist, challenging the U.S. Government's wars in Vietnam and Iraq, as well as the American Correctional System.

Robert Johnson, Ph.D., taught introductory psychology for 28 years at Umpqua Community College. He is especially interested in applying psychological principles to the teaching of psychology and in encouraging linkages between psychology and other disciplines. In keeping with those interests, Bob founded the Pacific Northwest Great Teachers Seminar, of which he was the director for 20 years. He was also one of the founders of Psychology Teachers at Community Colleges (PT@CC), serving as its executive committee chair during 2004. That same year he also received the Two-Year College Teaching Award given by the Society for the Teaching of Psychology. Bob has long been active in APA, APS, the Western Psychological Association, and the Council of Teachers of Undergraduate Psychology.

Aside from his contributions as coauthor of Psychology: Core Concepts, Bob is particularly proud of his articles in Teaching of Psychology. Recently he began a term as editor of The General Psychologist, the newsletter of the Society for General Psychology (Division 1 of APA). And, he is working on a book that brings to light what Shakespeare had to say about psychology.

Bob and his wife live on the North Umpqua River in Southern Oregon, where they can go kayaking in their front yard or bicycling in the valleys of the Cascade Mountains. In his spare time he likes making pottery and Thai curries.

Vivian McCann, a senior faculty member in Psychology at Portland Community College in Portland, Oregon, teaches a wide variety of courses, including introductory psychology, human relations, intimate relationships, and social psychology. Born and raised in the California desert just 10 miles from the Mexican border, she learned early on the importance of understanding cultural backgrounds and values in effective communication and in teaching, which laid the foundation for her current interest in teaching and learning psychology from diverse cultural perspectives. She loves to travel and learn about people and cultures, and to nurture the same passions in her students: She has led groups of students on three trips abroad, and in her own travels has visited 20 countries so far.

Vivian maintains a strong commitment to teaching excellence, and has developed and taught numerous workshops in that area. She currently serves on the APA’s Committee for Psychology Teachers at Community Colleges (PT@CC), and is an active member of the Western Psychological Association and APS. She is also the author of Human Relations: The Art and Science of Building Effective Relationships.

It's here!
MyPsychLab
Where learning comes to life!

An exciting new learning and teaching tool designed to increase student success in the classroom and give instructors quick and easy access to every resource needed to teach and administer an introductory psychology course.

Learning in context
With MyPsychLab students use an actual e-book, in the same layout as the printed version, to launch multimedia resources such as animations, video and audio clips, activities and simulations, and more.

Additional help, always available
MyPsychLab offers students free access to the Tutor Center - a one on one service during the hours when they need help most. They also get unlimited access to Research Navigator, an online database of academic journals, with help in writing papers and navigating resources.

An easy-to-use solution
Instructors can spend as much or as little time as they'd like customizing their course. Content is pre-loaded and ready to use. With a click of the mouse, instructors have access to the test item file, class grade book, PowerPoint slides, lecture outlines, and more!

For related titles and materials, visit our online catalog at www.ablongman.com.

“Before, I was seldom able to use multimedia in my classroom because our department has a small budget. Due to this exciting new tool, I now have access to every imaginable resource needed to teach and administer a psychology course! ”
Teresa R. Stalvey, Behavioral Science Instructor, North Florida Community College

“The fact that the student names are automatically entered into the grade book is a relief. Being able to check when a student logged in eliminates a few arguments. No more copying syllabi! It's all there for them. I've easily posted class notes, reminders of tests and dates for assignments. ”
Mary-Ellen O'Sullivan, Psychology Department, Southern Connecticut State University

“You have finally organized all the materials that have been stand-alone items for many years. ”
Fred Whitford, Montana State University

“This has been the best decision I've made on a textbook. Thanks again for introducing me to this concept. ”
Kathy Manuel, Psychology Department, Bossier Parish Community College