Items related to Physiology of Behavior 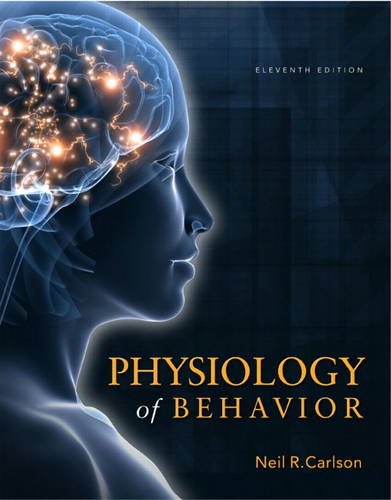 The most current, comprehensive, and teachable text for behavioral neuroscience

Thoughtfully organized, Physiology of Behavior provides a scholarly yet accessible portrait of the dynamic interaction between biology and behavior. Close collaboration between the author and a talented artist has resulted in beautiful, accurate, and pedagogically effective illustrations in every chapter.

No other author compares to Carlson when it comes to thoroughly updating research. This revision incorporates the latest discoveries in behavioral neuroscience, and includes over 400 new references. Integrated for the first time with MyPsychLab, featuring an interactive Virtual Brain, chapter study plans, flashcards, and other resources, Carlson's 11th edition offers students an immersive and engaging experience.

A better teaching and learning experience

This program will provide a better teaching and learning experience― for you and your students. Here’s how:

I pursued my undergraduate studies at the University of Illinois. I had planned to study nuclear physics, but when I discovered in an introductory psychology course that psychology was really a science, I decided that was what I wanted to do. Before changing my major, I talked with several professors and visited their laboratories, and when I saw what physiological psychologists do, I knew that I had found my niche. I stayed on at Illinois and received my Ph.D. Then, after a two-year postdoctoral fellowship at the University of Iowa, I came to the University of Massachusetts, where I’ve been ever since.

When I arrived at UMass I established a laboratory where I investigated the role of the limbic system in species-typical and learned behaviors, continuing work I had done at the University of Illinois. I received several Biomedical Research Support Grants and a research grant from NICHD. As I became more involved in textbook writing, I began to focus my attention more and more on this activity and on my teaching.

I took the opportunity afforded by my first sabbatical leave to write the first edition of Physiology of Behavior. I very much enjoyed the experience, and this endeavor taught me much more about behavioral neuroscience. I was gratified with the positive response of my students and of the colleagues who adopted the book. The pleasure provided by this response and by the enjoyment of keeping up with the literature and writing about it has kept me going for 11 editions. (I have no plans to stop writing.)

I retired from UMass in the fall of 2004 but continue to keep up with developments in the field of behavioral neuroscience and revise my book. The Psychology Department has kindly let me keep an office at the university, which makes it easier for me to continue interacting with my former colleagues.

My interests outside of writing include spending time with our family, traveling, fly fishing, skiing, and flying our small airplane."