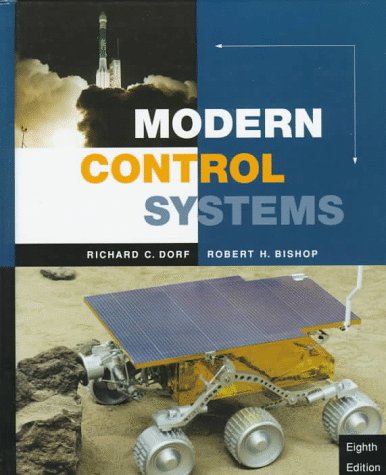 Two new features have been added to the eighth edition to complement the book’s strong integration of design and analysis. The Sequential Design Problem feature, using a disk drive as the example, highlights the main themes in each chapter and how they impact the design of a control system. A Continuous Design Problem is included at the end of each problem set to give students an opportunity to model, analyze, and design various types of controllers for a table-top machine tool as they proceed through the chapters. The textbook provides a clear exposition of the basic principles of control system design techniques using frequency- and time-domain methods as well as the state variable method.

For more than twenty years, Modern Control Systems has set the standard of excellence for undergraduate control systems textbooks. It has remained a bestseller because Richard Dorf and Robert Bishop have been able to take complex control theory and make it exciting and accessible to students. The book presents a control engineering methodology that, while based on mathematical fundamentals, stresses physical system modeling and practical control system designs with realistic system specifications.

The Mars Pathfinder mission is primarily an engineering demonstration of technologies and concepts for use in future Mars missions. The Mars Pathfinder spacecraft was launched aboard a Delta II-7925 launch vehicle on December 4, 1996 from the Cape Canaveral Air Station in Florida, USA. The launch is shown in the upper half of the front cover. After traveling 497,418,887 km, the spacecraft impacted the Martian surface on July 4, 1997 with a velocity of about 18 m/s. Upon impact the spacecraft bounced up about 15 meters, then continued to bounce another 15 times and rolled to a stop about 1 km from the initial impact point. The landing site is known as the Sagan Memorial Station and is located in the Ares Vallis region at 19.33 N, 33.55 W. The Sojourner Rover (weighing in at about 10.5 kg) began surface operations on July 6 after rolling off the ramp on all six-wheels onto the Martian soil. The Sojourner Rover is shown in the bottom half of the front cover. The Rover is controlled by operators on Earth using images obtained from the Rover itself. The time delay for signals and images to reach Earth from Mars is about 10 minutes. This time delay requires a degree of control autonomy by the Sojourner Rover. The Rover investigated rocks with interesting names like Barnacle Bill, Yogi and Scooby Doo.

Robert H. Bishop holds the Myron L. Begeman Fellowship in Engineering in the Department of Aerospace Engineering and Engineering Mechanics at The University of Texas at Austin. A talented educator, Professor Bishop has been recognized for his contributions in the classroom with the coveted Lockheed Martin Tactical Aircraft Systems Award for Excellence in Engineering Teaching. An active member of AIAA, IEEE, and ASEE, he also serves as an Associate Editor for the American Astronautical Society,s Journal of Astronautical Sciences. Dr. Bishop is a distinguished researcher with an interest in guidance, navigation, and control of aerospace vehicles.