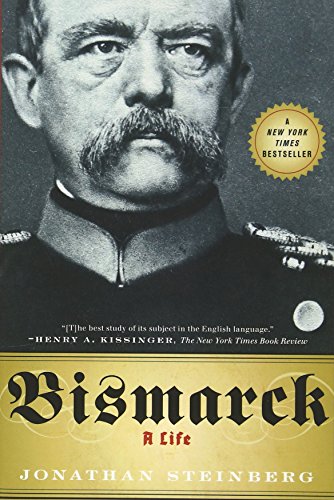 This riveting, New York Times bestselling biography illuminates the life of Otto von Bismarck, the statesman who unified Germany but who also embodied everything brutal and ruthless about Prussian culture.

Jonathan Steinberg draws heavily on contemporary writings, allowing Bismarck's friends and foes to tell the story. What rises from these pages is a complex giant of a man: a hypochondriac with the constitution of an ox, a brutal tyrant who could easily shed tears, a convert to an extreme form of evangelical Protestantism who secularized schools and introduced civil divorce. Bismarck may have been in sheer ability the most intelligent man to direct a great state in modern times. His brilliance and insight dazzled his contemporaries. But all agreed there was also something demonic, diabolical, and overwhelming in Bismarck's personality. He was a kind of malign genius who, behind the various postures, concealed an ice-cold contempt for his fellow human beings and a drive to control and rule them. As one contemporary noted: "the Bismarck regime was a constant orgy of scorn and abuse of mankind, collectively and individually." A brilliant study in power, this comprehensive biography brings Bismarck to life, revealing the stark contrast between the "Iron Chancellor's" unmatched political skills and his profoundly flawed human character.

"...Bismarck: A Life is the best study of its subject in the English language." -- Henry A. Kissinger, New York Times Book Review

"Fascinating biography...Mr. Steinberg breathes more life into Bismarck than any other biographer, thanks to an unusual scholarly method: He shifts the normal balance between analysis and evidence decisively in favor of the latter...The result is riveting, and we experience Bismarck as a hulking, breathing presence." --The Wall Street Journal

"A first-rate biography that combines a standard historical narrative with an intriguing account of Bismarck as a personality...Bismarck offers a fresh and compelling portrait of a fascinating character." -- ForeignAffairs.com
"Bismarck: A Life is a readable, engrossing...biography about the father of the Fatherland, a man who made Germany and remade Europe without a mandate, a crown or an army." -- Dallas Morning News
"This is the best one-volume life of Bismarck in English, much superior to older works. It brings us close to this galvanic, contradictory and ultimately self-destructive figure...Steinberg has an eye for details...and a talent for reconstructing the political drama of the period."-- The Guardian
"Steinberg...brings a fresh perspective to the subject in a single volume whose insights and presentation make it no less canonical than its predecessors." --Publishers Weekly, Starred Review

"Jonathan Steinberg's magnificent biography brings out the monstrous egotism of Bismarck more clearly than anyone before him...Steinberg has brilliantly transformed this man of 'blood and irony' into a tragic figure worthy to be compared with Goethe's Faust." -- New Criterion

"The Bismarck story is an oft-told one, and oft-told with a political or social agenda guiding the biographer's pen. Otto Pflanze's magisterial 1990 three-volume work set a new standard for Bismarck biographies and, more recently, Edgar Feuchtwanger's 'Imperial Germany 1850-1918' moved us beyond the standard Bismarck mythology. Jonathan Steinberg's 'Bismarck: A Life' fits neatly into this estimable body of work as a serious, politically detached, study...Steinberg's analysis achieves a degree of personal and political objectivity while avoiding an oversimplification of his political and governmental achievements...his purpose is neither to praise nor vilify the statesman. Rather, he aims to understand and explain Bismarck's profound success story: his brilliant strategies and tactics in bringing together the German states into a unified polity. In this, 'Bismarck: A Life' is a success story itself." -- Forward
"Portrays a fascinating picture of Germany, as well as its culture and politics...Jonathan Steinberg's biography is timely and necessary...Steinberg has written a compelling, readable and important book." -- Jerusalem Post

"If scholars and history buffs want to meet Bismarck in flesh and blood, they need go no further. Steinberg's integration of psychological insights and Bismarck's political strategies yields a worthy biography." -- Booklist

"Those with a serious interest in the subject will find it an intriguing one-volume addition to existing long works on Bismarck." -- Library Journal

"The best biography of the Iron Chancellor to date." -- Simon Sebag Montefiore, Wall Street Journal
"Other Bismarck biographies have been written, but what is unique about steinberg's is his effort to give voice to Bismarck's contemories - how they percieved and experienced him."-- Christian Century
"The book will probably become the standard work in English for some time to come. Essential." -- Choice

Book Description Oxford University Press, 2013. Paperback. Condition: New. SHIPS THE NEXT BUSINESS DAY LIKE NEW . COVID19 PRECAUTIONS IN PLACE. EACH OF OUR BOOKS IS METICULOUSLY INSPECTED AND ACCURATELY DESCRIBED. IN ADDITION OUR LIKE NEW CONDITION BOOKS ARE ALWAYS VERY VERY CLOSE TO NEW. Seller Inventory # pb-22712-VB

4. Bismarck: A Life (Paperback or Softback)