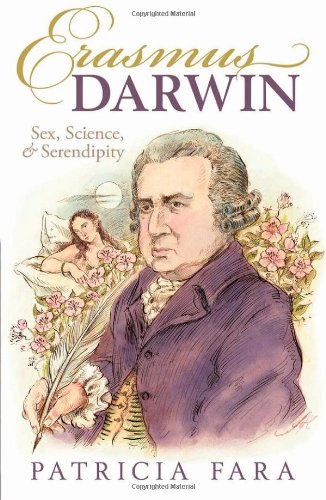 Dr Erasmus Darwin seemed an innocuous Midlands physician, a respectable stalwart of eighteenth-century society. But there was another side to him.

Botanist, inventor, Lunar inventor and popular poet, Darwin was internationally renowned for breathtakingly long poems explaining his theories about sex and science. Yet he become a target for the political classes, the victim of a sustained and vitriolic character assassination by London's most savage satirists.

Intrigued, prize-winning historian Patricia Fara set out to investigate why Darwin had provoked such fierce intellectual and political reaction. Inviting her readers to accompany her, she embarked on what turned out to be a circuitous and serendipitous journey.

Her research led her to discover a man who possessed, according to Samuel Taylor Coleridge, 'perhaps a greater range of knowledge than any other man in Europe.' His evolutionary ideas influenced his grandson Charles, were banned by the Vatican, and scandalized his reactionary critics. But for modern readers, he shines out as an impassioned Enlightenment reformer who championed the abolition of slavery, the education of women, and the optimistic ideals of the French Revolution.

As she tracks down her quarry, Patricia Fara uncovers a ferment of dangerous ideas that terrified the establishment, inspired the Romantics, and laid the ground for Victorian battles between faith and science.

More than half a century before his famous grandson, Erasmus Darwin was both renowned and viciously satirized for promulgating controversial scientific theories - albeit in long and sexually suggestive poems. Patricia Fara investigates why his ideas provoked such a vitriolic reaction and how he prefigured Victorian debates about faith and science. She also celebrates his championing of causes such as the abolition of slavery and the education of women.

Fara is no dry academic and her pleasing book is, in part, an entertaining account of her research journey in the Rare Books Department of Cambridge University Library and elsewhere. Some of her discoveries are engagingly serendipitous - an important, but sometimes understated feature of serious research. (Susan Elkin, Independent on Sunday)

An ingenious and engaging romp through the unexpected byways of scientific and social history. (The Lancet)

Fara's account is a welcome addition to the existing works on Darwin and offers a new way of understanding him as an important figure of the Enlightenment. (History West Midlands)

Book Description Condition: New. Brand New Original US Edition.We Ship to PO BOX Address also. EXPEDITED shipping option also available for faster delivery.This item may ship fro the US or other locations in India depending on your location and availability. Seller Inventory # AUDUU-38517