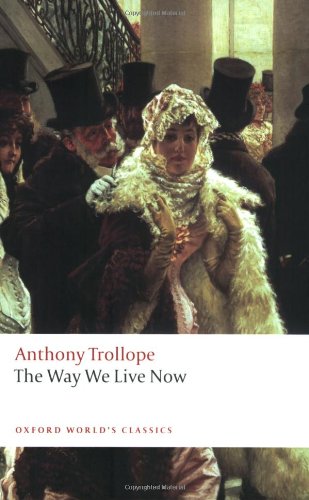 At first savagely reviewed, The Way We Live Now (1875) has since emerged as Trollope's masterpiece and the most admired of his works. When Trollope returned to England from the colonies in 1872 he was horrified by the immorality and dishonesty he found. In a fever of indignation he sat down to write The Way We Live Now, his longest novel. Nothing escaped the satirist's whip: politics, finance, the aristocracy, the literary world, gambling, sex, and much else. In this world of bribes and vendettas, swindling and suicide, in which heiresses are won like gambling stakes, Trollope's characters embody all the vices: Lady Carbury, a 43-year-old coquette, 'false from head to foot'; her son Felix, with the 'instincts of a horse, not approaching the higher sympathies of a dog'; and Melmotte, the colossal figure who dominates the book, a 'horrid, big, rich scoundrel ... a bloated swindler ... a vile city ruffian'.
ABOUT THE SERIES: For over 100 years Oxford World's Classics has made available the widest range of literature from around the globe. Each affordable volume reflects Oxford's commitment to scholarship, providing the most accurate text plus a wealth of other valuable features, including expert introductions by leading authorities, helpful notes to clarify the text, up-to-date bibliographies for further study, and much more.

"Trollope's masterpiece...its examination of how hopes of easy money can corrupt individuals and sections of society remains relevant today... It is all too easy to imagine the "Great Financier", Augustus Melmotte a shadowy, egotistical and tyrannical swindler, at the top of a contemporary investment bank." (Observer)

"Dominating the narrative is the majestically dishonest Augustus Melmotte: a speculative railroad financier who buys an English society only too willing to sell itself...The darkest of Trollope's 47 novels." (Guardian)

"His subtle depiction of relationships and the struggle to make decisions is unrivalled. He's so funny, so perceptive, so clear-sighted about the pursuit of money and power and status. Everyone with a pulse should read him." (Francesca Simon Guardian)

Trollope's magnificent and prescient satire about a dishonest financier who buys his way into a corrupt society, and throws it into turmoil