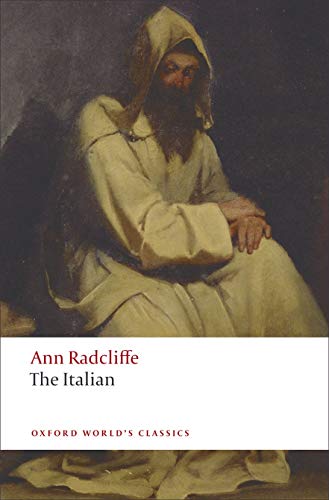 `His figure was striking, but not so from grace ... and as he stalked along, wrapt in the black garments of his order, there was something terrible in its air; something almost super-human.'

First published in 1797, The Italian is one of the finest examples of Gothic romance. The fast-paced, narrative centres on Ann Radcliffe's most brilliant creation, the sinister monk Schedoni, whose past is shrouded in mystery.

From the novel's opening chapters the reader is ushered into a shadowy world in which crime and religion are mingled. In the church of Santa Maria del Pianto in Naples, Ellena Rosalba and Vincentio di Vivaldi first meet; but their love is ill-omened. Leagued against them are the proud and ambitious Marchese di Vivaldi and her confessor Father Schedoni. When Ellena vanishes on the death of her guardian, Vivaldi sets out in pursuit of her across the mountainous regions of southern Italy before himself falling prey to the Holy Inquisition.

This revised and expanded edition explores the novel in the context of British attitudes to Italy and Roman Catholicism in the late eighteenth century with close attention to the novel's style and form.

ABOUT THE SERIES: For over 100 years Oxford World's Classics has made available the widest range of literature from around the globe. Each affordable volume reflects Oxford's commitment to scholarship, providing the most accurate text plus a wealth of other valuable features, including expert introductions by leading authorities, helpful notes to clarify the text, up-to-date bibliographies for further study, and much more.

Contains an 8-page plate section with long-unavailable pictures and drawings relating to Anne Radcliffe
and The Italian.

Includes a 10,000-word section on Anne Radcliffe's life and works, with a longer chapter on The Italian,
anecdotes, critical perspectives, adaptations and spin-offs.

1. The Italian: or The Confessions of the Black Penitents: A Romance.

Book Description PB. Condition: New. A fine example of Gothic romance, it was first published in 1797. The villainous monk, Schedoni, whose past is shrouded in mystery is one of her best-drawn characters. Lovers Ellena Rosalba and Vincentio di Vivaldi are eventually doomed to the Inquisition, but are supernatural forces at work?. Seller Inventory # 9780199537402