Items related to A Brief History of Neoliberalism

A Brief History of Neoliberalism 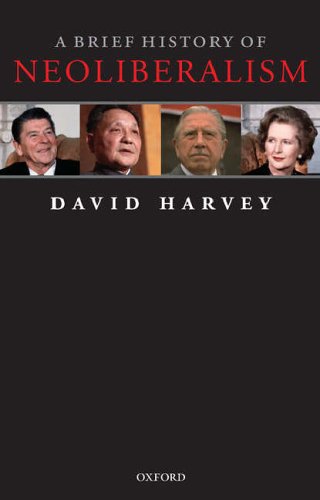 Neoliberalism - the doctrine that market exchange is an ethic in itself, capable of acting as a guide for all human action - has become dominant in both thought and practice throughout much of the world since 1970 or so. Its spread has depended upon a reconstitution of state powers such that privatization, finance, and market processes are emphasized. State interventions in the economy are minimized, while the obligations of the state to provide for the welfare of its citizens are diminished. David Harvey, author of 'The New Imperialism' and 'The Condition of Postmodernity', here tells the political-economic story of where neoliberalization came from and how it proliferated on the world stage. While Thatcher and Reagan are often cited as primary authors of this neoliberal turn, Harvey shows how a complex of forces, from Chile to China and from New York City to Mexico City, have also played their part. In addition he explores the continuities and contrasts between neoliberalism of the Clinton sort and the recent turn towards neoconservative imperialism of George W. Bush. Finally, through critical engagement with this history, Harvey constructs a framework not only for analyzing the political and economic dangers that now surround us, but also for assessing the prospects for the more socially just alternatives being advocated by many oppositional movements.

David Harvey has produced an extraordinary book that is both informative and daring in its analsis. (Ionnis Hlinavos, Development and Change)

'presents a concise but extremely well-documented economic history of the last three decades, encompassing not only the usual G7 countries but the entire world, with a particular emphasis on the US and capitalist China.' (Brian Holmes, Interactivist Info Exchange)

David Harvey has done it again. He has provided us with the most lively, readable, comprehensive, and critical guide to what might be called the condition of neoliberalism", uncovering its origins, tracing its spread around the globe, and exposing its devastating effects on the vast majority of people everywhere. (Leo Panitch, Canada Research Chair in Comparative Political Economy, York University, Toronto)

With characteristic brilliance, David Harvey offers a razor-sharp analysis of the history and current condition of neoliberalism. In an intellectually extraordinary tour de force, he dissects the contradictions between the freedoms offered by neoliberalism and the liberties desired by the people. This book convincingly demonstrates how neoliberalism restores class power, flirts openly with authoritarianism, and undermines democratic impulses. With democracy under siege, freedom's prospect resides squarely in the struggle for new political governance. A must read if you want to know the state we are in and how to change it. (Erik Swyngedouw, Professor of Geography, University of Oxford)

1. A Brief History of Neoliberalism

2. A Brief History of Neoliberalism

3. A Brief History of Neoliberalism

4. A Brief History of Neoliberalism