Items related to Speak: A Short History of Languages

Speak: A Short History of Languages 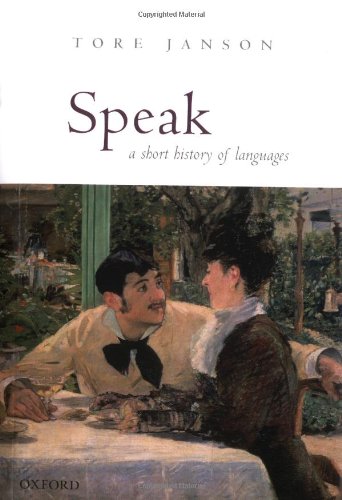 This book is a history of human speech from prehistory to the present. It charts the rise of some languages and the fall of others, explaining why some survive and others die. It shows how languages change their sounds and meanings, and how the history of languages is closely linked to the history of peoples.

Writing in a lively, readable style, distinguished Swedish scholar Tore Janson makes no assumptions about previous knowledge. He takes the reader on a voyage of exploration through the changing patterns of the world's languages, from ancient China to ancient Egypt, imperial Rome to imperial Britain, Sappho's Lesbos to contemporary Africa. He discovers the links between the histories of societies and their languages; he shows how language evolved from primitive calls; he considers the question of whether one language can be more advanced than another. The author describes the history of writing and looks at the impact of changing technology. He ends by assessing the prospects for English world domination and predicting the languages of the distant future.

Five historical maps illustrate this fascinating history of our defining characteristic and most valuable asset.

Tore Janson is a Swedish linguistic scholar who has studied and worked much in the USA. To the surprise of the sceptical, he manages to make the history of language interesting in Speak, a well written and solidly researched little book. He begins with a study of the most basic communication skills, proceeds to theorise how language developed and then traces written language and the fascinating family tree of linguistic development down through history and around the world to the present day pre-eminence of English. The book is complete with six maps tracing world linguistic development as well as helpful tables and charts that compare languages. Anyone who has taken an interest in language or has seriously tried to learn a foreign language will be interested.

Maybe Oxford University Press have published Speak in an attempt to cash in on the ongoing enthusiasm for JRR Tolkien, philologist and Oxford don, by making linguistic history interesting and available to a wide audience. However, readers should not be deceived by the attractive cover, catchy title and small format. This is a serious, detailed study that will require some effort. That effort will be rewarded though with a greater appreciation and understanding for the unique human gift of language. --Dwight Longenecker

[Janson's] English style is neat and clear, and overall, this book can hardly be praised too highly. (Roger Wright, University of Liverpool, Diachronica)

... new ideas and insights are constantly emerging even in the narrative of well-estabished facts ... controversial topics are often presented from both sides, and when [Janson] makes a decision to come down on one side of an argument it is the result of careful thought. (Roger Wright, University of Liverpool, Diachronica)

[Janson] is particularly good at seeing what the most important and relevant questions are, and then presenting them clearly. (Roger Wright, University of Liverpool, Diachronica)

A synthesis of the whole of linguistic history is remarkable enough in itself, but to have made it generally accessible to an educated non-specialist public is a real achievement. (Roger Wright, University of Liverpool, Diachronica)

I like Tore Janson's book very much, and can see why the original Swedish version has been a best-seller. He has translated it himself, and writes with authority and clarity on a topic which has rarely, if ever, been presented in such a wide and coherent perspective. (Roger Wright, University of Liverpool, Diachronica)

1. Speak: A Short History of Languages

2. Speak: A Short History of Languages