Items related to The Principles of Criminal Evidence (Clarendon Law...

Zuckerman, A. A. S. The Principles of Criminal Evidence (Clarendon Law S.) 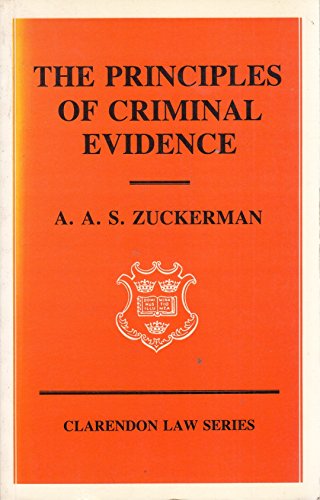 The law of criminal evidence has a cohesion of principles which requires its separate treatment. Like any procedure for determining the truth about events, it has to be evaluated by reference to its structure and its general principles. This introductory textbook on the law of criminal evidence explains that its central feature is the continual search for a balance between competing demands, the first of which is the desire to discover the truth. This desire assumes a special significance in the criminal trial where it reflects the powerful public interest in bringing offenders to justice. The second principle is the protection of the innocent from conviction, which finds expression in several rules such as the requirement of proof beyond reasonable doubt and the rule excluding evidence which may create prejudice against the second. The third principle is that of maintaining standards of propriety in the criminal process. The latter underpins the privilege against self-incrimination, affects the procedure for obtaining confessions and influences the court's attitude to improperly obtained evidence.

Adrian Zuckerman is a Fellow of University College, Oxford. Paul Roberts is Reader in Criminal Justice at the University of Nottingham.

The Principles of Criminal Evidence

Book Description Condition: Very Good. Used book that is in excellent condition. May show signs of wear or have minor defects. Seller Inventory # 21418024-6

Book Description Paperback. Condition: Very Good. The book has been read, but is in excellent condition. Pages are intact and not marred by notes or highlighting. The spine remains undamaged. Seller Inventory # GOR003259821

Book Description Condition: Good. A+ Customer service! Satisfaction Guaranteed! Book is in Used-Good condition. Pages and cover are clean and intact. Used items may not include supplementary materials such as CDs or access codes. May show signs of minor shelf wear and contain limited notes and highlighting. Seller Inventory # 0198762348-2-4

THE PRINCIPLES OF CRIMINAL EVIDENCE.