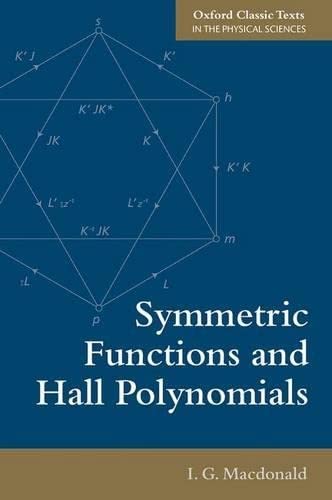 The first edition was published in 1979, before being significantly expanded into the present edition in 1995. This text is widely regarded as the best source of information on Hall polynomials and what have come to be known as Macdonald polynomials, central to a number of key developments in mathematics and mathematical physics in the 21st century

Macdonald polynomials gave rise to the subject of double affine Hecke algebras (or Cherednik algebras) important in representation theory. String theorists use Macdonald polynomials to attack the so-called AGT conjectures. Macdonald polynomials have been recently used to construct knot invariants. They are also a central tool for a theory of integrable stochastic models that have found a number of applications in probability, such as random matrices, directed polymers in random media, driven lattice gases, and so on.

Macdonald polynomials have become a part of basic material that a researcher simply must know if (s)he wants to work in one of the above domains, ensuring this new edition will appeal to a very broad mathematical audience.

Featuring a new foreword by Professor Richard Stanley of MIT.

From reviews of the first edition: 'Despite the amount of material of such great potential interest to mathematicians...the theory of symmetric functions remains all but unknown to the persons it is most likely to benefit...Hopefully this beautifully written book will put an end to this state of affairs...I have no doubt that this book will become the definitive reference on symmetric functions and their applications.' (Bulletin of the AMS)

...In addition to providing a self-contained and coherent account of well-known and classical work, there is a great deal which is original. The book is dotted with gems, both old and new...It is a substantial and valuable volume and will be regarded as the authoritative source which has been long awaited in this subject. (LMS book reviews)

From reviews of the second edition: 'Evidently this second edition will be the source and reference book for symmetric functions in the near future. (Zbl. Math.)

Book Description Oxford University Press, 2021. Condition: NEW. 9780198739128 This listing is a new book, a title currently in-print which we order directly and immediately from the publisher. Print on Demand title, produced to the highest standard, and there would be a delay in dispatch of around 10 working days. For all enquiries, please contact Herb Tandree Philosophy Books directly - customer service is our primary goal. Seller Inventory # HTANDREE01595157