Items related to The Transformation of British Politics 1860-1995

The Transformation of British Politics 1860-1995 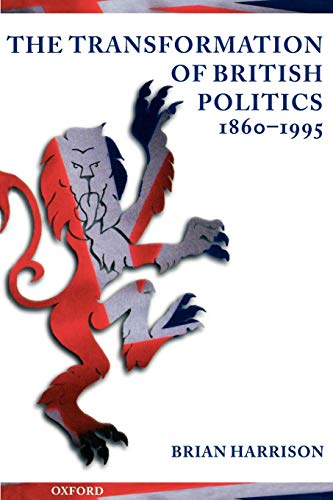 The British political system, though often criticized, has been the model and the inspiration for many national governments world-wide. It is the center of controversial debate within Britain itself. Yet over the 130 years since Bagehot wrote his English Constitution, no historian has investigated in depth how it has evolved in all its dimensions, and few political scientists have looked further back than the Second World War. This is the first book to provide a detailed explanation of how the British political syustem came to acquire the form it has today.

This is a major work of political science which is enriched and enlightened by skilful use of the revelant details of the British past...The Transformation of British Politics is a mojor contribution to the study of the modern political history of Britain...It is a book both to refer to and to argue over. (Chris Wrigley, Parliamentary History.)

His direct, fresh, unpompous, down to earth style of writing carries the reader along with his zest for life and affairs, and is often refreshingly forthright in uncovering the reality that lies behind the appearances...his book is a pleasure to read. It will also be a handy reference work: thematically arranged and carefully indexed, it is enriched by a critical chronology that pinpoints some of turning points of the period 1860-1995, arranged according to Harrisson's own scheme of analysis. Full of highly quotable epigrams, The Transformation of British Politics will be choice reading for political analysts, comparative historians, and historical sociologists alike. (Eugenio F. Biagini, Journal of Modern History, Volume 70, number 3, September 1998.)

enormously informative book ... Transformation is a challenging but rewarding reconstruction of "a living Constitution" that leaves all historians of modern Britain in its debt; no doubt a resurrected Bagehot would be fascinated by this account of its continuous evolution. (John F. Naylor, Albion)

Brian Harrison is an admirable guide to the history that has produced the state of our current politics ... fruitfully committed to a historical understanding of British politics. (Peter Clarke, The Guardian)

Brian Harrison does a service with a painstakingly researched and well presented book ... we will be well served if all 'would be reformers' will read it. In a short review, it is impossible to comment on every subject, but each is dealt with in a masterly fashion. It is made more readable by the 'segmental' rather than chronological approach. (Robert S. Redmond, Contemporary Review)

The Transformation of British Politics is really two books, artfully, even brilliantly, combined within one set of covers. One is a hugely learned, wide-ranging and in some registers strikingly innovative history of British political institutions since the 1860s. The other is a polemical broadside against radical constitutional reform. Dr Harrison has produced perhaps the finest contemporary history of British politics yet written. (Stephen Howe, History Today, Vol. 47 (8) Aug 97)

This is a book which all readers of Contemporary British History should not only read but also buy for their institutional and their personal libraries. Only rarely does an author so well equipped for the task attempt a synthesis of the whole range of big issues surrounding the way in which political life is practised in Britain and bring it off in so stimulating and so provocative a way. (John Ramsden, Queen Mary and Westfield College, Contemporary British History, Vol. 11, No. 1, Spring '97)

the book has made a timely appearance ... It should be pondered over by all those who seek fundamental modifications of the state we are in. Historians have indeed, as Harrison argues, in recent decades lost the opportunity for bringing their own distinctive perspectives to bear. If this is indeed a world we have lost, his book shows how much we have to gain by rediscovering it. (Keith Robbins, University of Wales, Lampeter, EHR Nov. 97)

Harrison has written a very substantial and enjoyable study of the modern British political system... based on a great depth of knowledge of late nineteenth and twentieth-century British political history ... Harrison's canvas is large and he paints on it boldly ... major work of political science ... mature work of a major scholar drawing on the insights of many years. (Chris Wrigley, University of Nottingham.)

The British political system has been the model and the inspiration for many national governments world-wide. Yet it is now at the centre of controversial debate within Britain itself. Over the 130 years since Bagehot wrote his English Constitution, no historian has investigated in depth how it has evolved in all its dimensions, and few political scientists have looked further back than the Second World War. This is the first book to provide a detailed explanation of how the British political system came to acquire the form it has today. Brian Harrison's broad-ranging, authoritative analysis runs continuously from the 1860s to the 1990s. He investigates such topics as civil liberties, pressure groups, parliament, elections and the parties, central and local government, cabinet, and monarchy. He examines the international and cultural influences on the working of the political system, and concludes by surveying current proposals for reform. With an ample guide to further reading, and a full chronology of leading events, this book will be essential reading for students of politics and history.