Fitzgibbons, Athol Adam Smith's System of Liberty, Wealth, and Virtue: The Moral and Political Foundations of The Wealth of Nations

Adam Smith's System of Liberty, Wealth, and Virtue: The Moral and Political Foundations of The Wealth of Nations 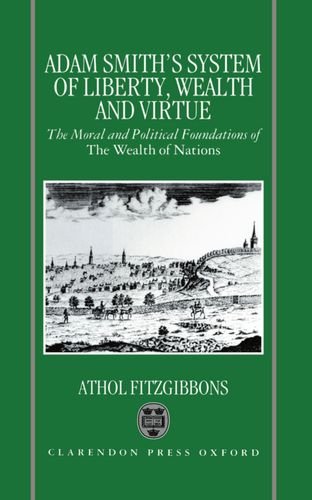 This book examines the influence that Adam Smith's philosophy had on his economics, drawing on the neglected parts of Smith's writings to show that the political and economic theories built logically on his morals. It analyses the significance of his stoic beliefs, his notions of art and music, astronomy, philosophy and war, and shows that Smith's invisible hand was part of a 'system' that was meant to replace medieval Christianity with ethic of virtue in this world rather than the next. Smith was motivated primarily by a political ideal, a moral version of liberalism. He rejected the political philosophy of the Greeks and Christians as authoritarian and unworldly, but contrary to what many economists believe, he also rejected the amoral liberalism that was being advocated by his countryman and friend David Hume. Far from being myopic about self-love, Smith arrived at his theories of free trade, economic growth, and alienation via his reinterpretation of Stoic virtue. Of interest to economists, philosophers, political theorists, sociologists and lawyers concerned with jurisprudence, this book is clearly written, and its innovations reveal the hitherto hidden unity in Smith's overarching system of morals, politics and economics.

Athol Fitzgibbons' book is a welcome addition to this literature on Smith. It is gracefully executed and should stimulate considerable discussion ... Smith scholars will find the book both provocative and stimulating ... I highly recommend this book not only to a narrow group of specialists, but to economists, historians, philosophers, and social scientists generally. (Australian Economic History Review)

Athol Fitzgibbon's excellent work is a most welcome addition to the "new" Smith canon that has emerged over the past few years ... His thesis is clearly and succinctly stated in the opening lines of the preface ... outstanding study ... Fitzgibbon's well-written work will appeal to a wide variety of scholars as well as the general reader. It is now the best synthetic analysis of Smith's system available and deserves a wide audience. (American Political Science Review)

1. Adam Smith's System of Liberty, Wealth, and Virtue: The Moral and Political Foundations of The Wealth of Nations [Hardcover] Fitzgibbons, Athol

2. Adam Smith's System of Liberty, Wealth, and Virtue: The Moral and Political Foundations of The Wealth of Nations

3. ADAM SMITH'S SYSTEM OF LIBERTY, WEALTH, AND VIRTUE. THE MORAL AND POLITICAL FOUNDATIONS OF "THE WEALTH OF NATIONS"