Items related to Politics in the Portuguese Empire: The State, Industry...

Pitcher, M. Anne Politics in the Portuguese Empire: The State, Industry and Cotton, 1926-74

Politics in the Portuguese Empire: The State, Industry and Cotton, 1926-74 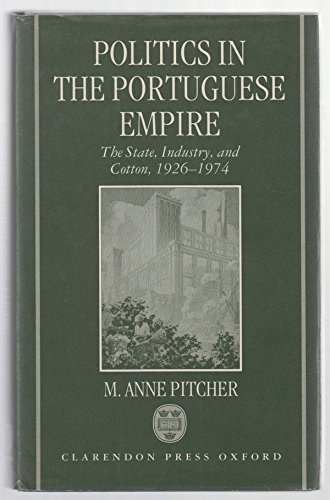 Did the expansion of colonial empires in Africa drain the resources of the metropole or did they produce new pockets of wealth? Whether colonialism brought costs or benefits to metropolitan governments and industry occupied the minds of European policy-makers and manufacturers of the 19th century and has fuelled debates among scholars of colonialism during most of the 20th century. Portugal's empire in Africa was no exception. Although it furnished protected markets and guaranteed supplies for trade and industry, the empire also exacted its price. For the Portuguese, as for many other colonial powers, no undertaking exposed the benefits and burdens as starkly as the creation of the cotton regime. Anne Pitcher looks in detail at metropolitan and colonial policy under the Salazar and Caetano governments, and critically assesses the influence of empire on the development of the textile industry in metropolitan Portugal. She challenges myths about the corporate nature of the Portuguese regime after 1926, exposes the pitfalls of authoritarian economic solutions and concludes that links with empire were not necessarily beneficial. Instead, conflicting interests and contradictory policies had unintentional, even debilitating, effects on many participants in the system - from African cotton producers to metropolitan textile manufacturers. This study examines the complex relationship between the Portuguese authoritarian regime, the domestic textile industry, and colonial cotton production in Angola and Mozambique. Contrary to the common assumption, it argues that state policies did not always favour Portugal's major industry, nor did links with the empire consistently benefit it. Its findings should interest not only scholars working on the political economy of Portugal and Portuguese-speaking Africa, but also comparativists studying the costs and benefits of empire or investigating different models of development.

"[T]his is a well-researched and clearly analyzed monograph that adds further to our detailed knowledge of state policy and economic development in Portugal and its empire under the dictatorship."--American Historical Review

Politics in the Portuguese Empire: The State, Industry, and Cotton, 1926-1974