Items related to Essay on the Law of Nature

Locke, John Essay on the Law of Nature

Essay on the Law of Nature 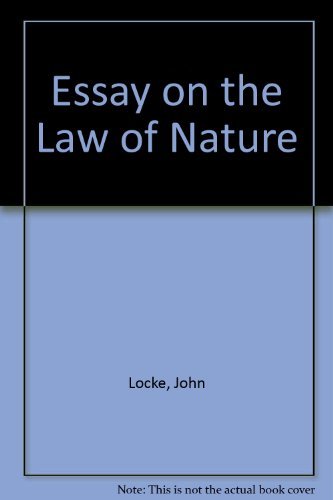 The philosopher John Locke (1632-1704) used this work to explain his theory on how natural law is known and to what extent it is binding. This volume also contains an introduction which aims to shed light on Locke's thought and literary career, and a critical exposition of the argument of the "Essays", with a discussion of their place in the history of thought. The text also includes Locke's valedictory speech as Censor of Moral Philosophy at Christ Church, Oxford, and transcripts of his philosophical writings in shorthand.

W. von Leyden was formerly Distinguished Visiting Scholar in the Department of Government at the London School of Economics and Political Science.

1. Essays on the Law of Nature: The Latin Text with a Translation, Introduction and Notes, Together wit

2. Essays on the Law of Nature: The Latin Text with a Translation, Introduction and Notes, Together with Transcripts of Locke's Shorthand in his Journal for 1676 Locke, John and Leyden, W. Von