Items related to Hegel's Philosophy of Right: Translated with Notes...

Hegel's Philosophy of Right: Translated with Notes by T.M. Knox 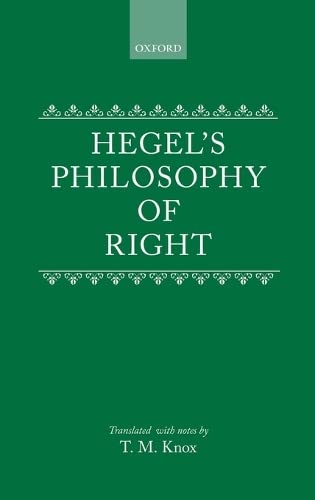 Considered by some the best introduction to and explication of the thought of German Idealist philosopher GEORG WILHELM FRIEDRICH HEGEL (1770–1831), this 1896 translation by SAMUEL WATERS DYDE (b. 1862) of the philosopher’s great 1821 work offers a succinct but comprehensive discussion of concepts of free will. A philosophical disciple of Kant, Hegel saw that free will could exist only within the larger context of human life: of family, of work, of legality and morality—human freedom, Hegel believed could not exist in a vacuum but only via an individual’s interactions with the social networks of humanity. Hegel’s understanding of the individual’s impact on such grand canvases as history itself exerted an unparalleled influence on German philosophy throughout the 19th century, including upon Karl Marx and his Communist Manifesto. Philosophy of Right, then, deserves a place in the essential library of anyone wishing to understand modern political thinking.

Among the most influential parts of the philosophy of G.W.F. Hegel (1770-1831) were his ethics, his theory of the state, and his philosophy of history. The Philosophy of Right (Grundlinien der Philosophie des Rechts) (1821), the last work published in Hegel's lifetime, is a combined system of moral and political philosophy, or a sociology dominated by the idea of the state. Here Hegel repudiates his earlier assessment of the French Revolution as a "a marvelous sunrise" in the realization of liberty. Rejecting the republican form of government, he espouses an idealized form of a constitutional monarchy, whose ultimate power rests with the sovereign.

Georg Wilhelm Friedrich Hegel (1770-1831) was a German philosopher and a major figure in German Idealism.