Items related to Old Friends, New Enemies. The Royal Navy and the Imperial... 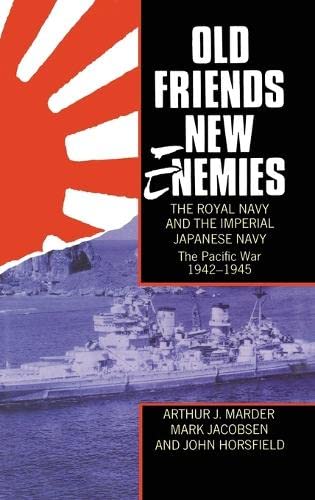 This first scholarly account of the Royal Navy in the Pacific War is a companion volume to Arthur Marder's Old Friends, New Enemies: Strategic Illusions, 1936-1941 (0-19-822604-7, OP). Picking up the story at the nadir of British naval fortunes - `everywhere weak and naked', in Churchill's phrase - it examines the Royal Navy's role in events from 1942 to the Japanese surrender in August 1945.

Drawing on both British and Japanese sources and personal accounts by participants, the authors vividly retell the story of the collapse of Allied defences in the Dutch East Indies, culminating in the Battle of the Java Sea. They recount the attempts of the `fighting admiral', Sir James Somerville, to train his motley fleet of cast-offs into an efficient fighting force in spite of the reluctance of Churchill, who resisted the formation of a full-scale British Pacific Fleet until the 1945 assault on the Ryukyu Islands immediately south of Japan.

Meticulously researched and fully referenced, this unique and absorbing account provides a controversial analysis of the key personalities who shaped events in these momentous years, and makes fascinating reading for anyone interested in the Pacific War.

This book also appears in the Oxford General Books catalogue for Autumn 1990.

'bears all the marks of his very individual scholarship and style ... narrated Britain's imperial decline - with devotion and skill in combining research, narration, and analysis which have seen no contemporary rival' Anthony Verrier, Financial Times

`... Mark Jacobsen and John Horsfield deserve to be congratulated on what they have accomplished.' Christopher Thorne, TLS

`a splendidly even-handed account ... This book bears out Peter Kemp's accolade, introducing the previous volume: he called Marder "the supreme historian".' The Economist

'both grasp of detail and clarity of narrative are again features of this new book, in all its sections ... the three authors between them have provided a helpful survey of relevant developments in the Japanese camp' Times Literary Supplement

A vivid, accessible, and controversial study of events and personalities in the Pacific War