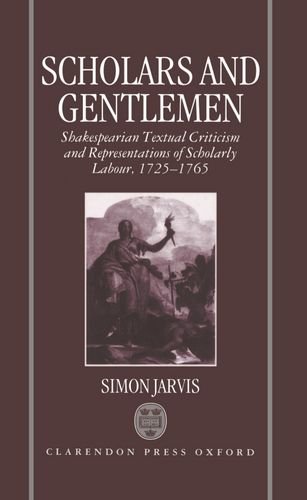 Among the earliest editors of Shakespeare were several of the eighteenth century's most powerful writers. Scholars and Gentlemen demonstrates how much was at stake for these writers in the editing of English texts.

Simon Jarvis examines not only eighteenth-century texts of Shakespeare, but also sources as disparate as Pope's Dunciad, eighteenth-century classical and scriptural editing, and Johnson's Dictionary to show the importance of politically contested representations of scholars and scholarship for the formation of British public literary culture. Offering an unprecedented detailed account of both editorial theory and philological practice during the period, the book throws new light on a wide variety of issues, from the debates over the possibility of a polite and settled national language to the epistemological and cultural presuppositions of editorial method.

Scholars and Gentlemen will interest not only students of eighteenth-century English literature, but also readers, editors, and critics of Shakespeare, and all those concerned with the theoretical implications of the reproduction of literary texts today.

Among the earliest editors of Shakespeare were several of the 18th century's most powerful writers. This study demonstrates how much was at stake for these writers in the editing of English texts. Drawing on sources from pamphlet wars and Pope's "Duncaid" to detailed analyses of editorial practice and Johnson's "Dictionary", the book shows how central to the formation of British public literary culture were politically contested representations of scholarship.

Jarvis manages to combine minute textual detail with broad argument: he has written an excellent book for literary historians, bibliographers, and Shakespeareans...Jarvis has made a significant and timely contribution to 18th century Shakespearian studies...powerful and convincingly argued case. (Times Higher Education Supplement)

a welcome look at the fluid nature of eighteenth-century English bibliographical, lexicographical, and editorial practices ... What supports Jarvis' argument throughout the book is his own thoroughness, his extensive range of reference, and his careful documentation: he nicely demonstrates the principles he admires ... Jarvis has peformed his task admirably ... for the expansion or clarification of the notes regarding collations ... the reader can be most grateful. The bibliography is, in itself, a useful source that students will value ... Scholars and Gentlemen is not a quick read, but it is, nonetheless, a rewarding one which will pay fair dividends even to those whose principal realm is not editorial practice. (Early Modern Literary Studies)

Dr Jarvis picks his way sure-footedly through some very boggy ground, and has made a valuable contribution to the history of Shakespeare criticism and of textual criticism in general. (English Studies)

Jarvis provides much interesting material to do with professional and gentlemanly views of the duties of an editor, (Peter Seary/Modern Philology Vol 96 No 1 (Feb 1998))