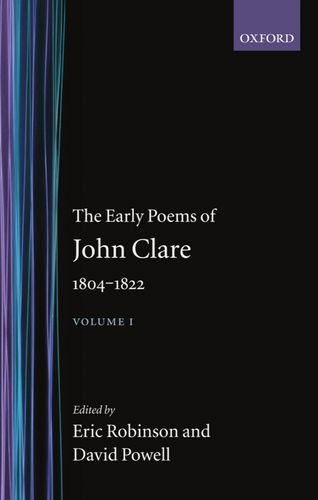 For the first time all Clare's early poems are brought together with all known variants, and with Clare's characteristic vocabulary, grammar, spelling, and punctuation preserved. Through this collection, ranging from juvenilia to the published poems that first established his reputation with Poems Descriptive of Rural Life and Scenery and The Village Minstrel, it becomes clear how many more poems Clare composed in these early years than have previously seen the light of day. Strenuous efforts have been made to recover poems obliterated in some of Clare's first manuscripts, and the complete text of The Parish, his major satirical poem, is included. A glossary is provided for both volumes, together with extensive annotation. Clare's own dating of his first poems is employed and every attempt has been made to establish a reliable chronology. This edition provides the first reliable basis for a new assessment of Clare's poetic growth, allowing his increasing assurance as a poet writing in a characteristic idiom of his own to be traced, and demonstrating how surprisingly early his individuality as a poet emerged.

'The editors have done a remarkable job in restoring his texts ... it is marvellous to read the poems in their freshness.' Jonathan Bate, Country Life

'This is a true scholarship: these volumes - whatever their price and weight - are long overdue.' Glasgow Herald

'outstanding quality ... It will unquestionably be the authoritative text of Clare's early poetry for decades to come.' Tim Chilcott, West Sussex Institute of Higher Education, Review of English Studies, Vol.XLI, No.164, Nov '90

Robinson and his editorial team have directly and indirectly fostered interest in poets whose social origins have adversely affected the reception and republication of their works in the twentieth century... The two most recent volumes make Clare's poetic production available in handsome cloth-bound editions. Robinson et al have been on a four-decade long campaign to give us Clare, warts and all. (Bridget Keegan, The Wordsworth Circle Autumn '99)

'Admirers of Clare, increased in number as a direct result of Eric Robinson's and his team's tireless efforts, will eagerly pore over the fine print of these texts, and just as eagerly await the next instalment of this mammoth project.' Mark Story, University of Birmingham, Notes and Queries, March 1991