Items related to Shameful Flight: The Last Years of the British Empire...

Wolpert, Stanley Shameful Flight: The Last Years of the British Empire in India

Shameful Flight: The Last Years of the British Empire in India 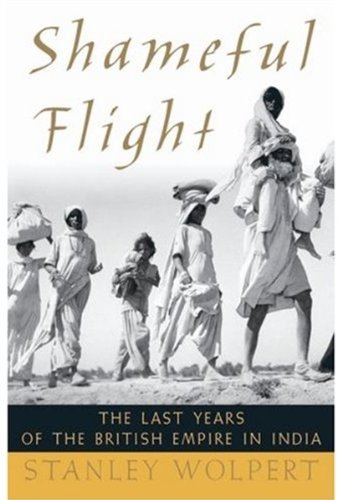 Britain's precipitous and ill-planned disengagement from India in 1947--condemned as a "shameful flight" by Winston Churchill--had a truly catastrophic effect on South Asia, leaving hundreds of thousands of people dead in its wake and creating a legacy of chaos, hatred, and war that has lasted over half a century.
Ranging from the fall of Singapore in 1942 to the assassination of Mahatma Gandhi in 1948, Shameful Flight provides a vivid behind-the-scenes look at Britain's decision to divest itself from the crown jewel of its empire. Stanley Wolpert, a leading authority on Indian history, paints memorable portraits of all the key participants, including Gandhi, Churchill, Attlee, Nehru, and Jinnah, with special focus on British viceroy, Lord Louis Mountbatten. Wolpert places the blame for the catastrophe largely on Mountbatten, the flamboyant cousin of the king, who rushed the process of nationhood along at an absurd pace. The viceroy's worst blunder was the impetuous drawing of new border lines through the middle of Punjab and Bengal. Virtually everyone involved advised Mountbatten that to partition those provinces was a calamitous mistake that would unleash uncontrollable violence. Indeed, as Wolpert shows, civil unrest among Muslims, Hindus, and Sikhs escalated as Independence Day approached, and when the new boundary lines were announced, arson, murder, and mayhem erupted. Partition uprooted over ten million people, 500,000 to a million of whom died in the ensuing inferno.
Here then is the dramatic story of a truly pivotal moment in the history of India, Pakistan, and Britain, an event that ignited fires of continuing political unrest that still burn in South Asia.

Stanley Wolpert is Professor of History Emeritus at the University of California, Los Angeles. He is the author of Gandhi's Passion, Nehru: A Tryst With Destiny, Jinnah of Pakistan, and A New History of India.

"The independence of India and Pakistan in 1947 was a historical watershed that marked the end of the colonial era and the beginning of the liberation of the rest of Asia and of Africa. In his admirable account of this seminal event, Wolpert makes the compelling case that whereas independence and partition were inevitable, the horrible cost in the destruction of lives was not. He attributes the latter to a failure of political leadership, especially the British through its representative Viceroy Mountbatten, whose compulsive and egotistical conduct constituted a major contribution to the massive human disaster. This is a clinically powerful study of triumph and tragedy by a distinguished historian who is also a great humanitarian." --Jamsheed Marker, Former Ambassador of Pakistan and former Special Adviser to the Secretary General, United Nations

"In this engrossing, but very controversial, book, Wolpert considers the responsibility of the leaders, both British and Indian, for the immediate consequences of the partition in 1947 of British India into India and Pakistan when hundreds of thousands were killed in riots and millions became homeless refugees. Shameful Flight is sobering reading for anyone interested in the rise and fall of Western imperialism."--Ainslee Embree, Columbia University
"Wolpert's book is a delightful read and will shine for its stellar quality of scholarship among the growing body of partition literature that has surfaced in the last two decades. It will be of great interest to anyone curious about whatever happened to the great British Empire and those who often wonder why Indians and Pakistanis endlessly fight with each other."--Dilip Basu, University of California, Santa Cruz
"An entertaining and highly controversial account of the British transfer of power in India."--The International History Review
"A lively...account of the end of the British Raj...The text is well crafted." -- H-Net

1. Shameful Flight: The Last Years of the British Empire in India

2. Shameful Flight: The Last Years of the British Empire in India