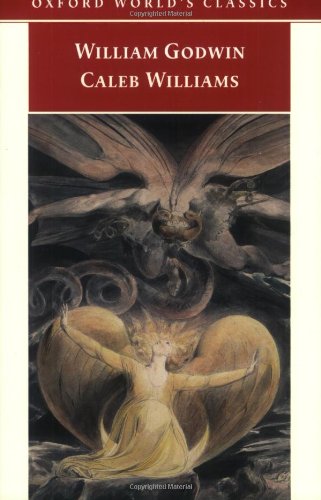 "The originality of Caleb Williams will be obvious to the student or general reader who encounters it in this exemplary addition to the Broadview [Editions] series. The editors provide a clear, thorough introduction that places the novel in its political, philosophical, and literary contexts, as well as a chronology and bibliography. Six appendices serve up generous helpings of the fruits of recent scholarship that illuminate the fiction's relation to things as they were. Providing glimpses of Godwin at work, samples of ardent political discourse of the 1790s, and snippets of narrative by Holcroft, Wollstonecraft, Richardson, Defoe, and less well-known writers, the supplementary materials are fascinating in themselves." - Rachel M. Brownstein, The Graduate School and University Center, CUNY

William Godwin was an activist liberal, even radical during the Napoleonic era in Britain. He was a political philosopher of rationalism, even as far as atheism. This novel centers on the injustices of the, at the time, current justice system that accused and imprisoned an innocent man. In the process, Godwin incorporated most of the elements that we today associate with the detective novel—in this case the "detective" is also the pursued, which makes it all the more difficult to come to a satisfactory conclusion. Godwin was, eventually, married to the staunch feminist writer Mary Wollstonecraft, who, unfortunately, died in childbirth, giving birth to Mary, who would later write the pioneer science fiction novel Frankenstein, and marry the poet Percy Bysshe Shelley. One of her novels William Godwin forbade her to publish during her lifetime, though it is now in publication by Bandanna Books -- Matilda. Matilda is an orphan child whose mother died and father ran away to a foreign land. When he returns and she is in her teens, the father begins to have incestuous thoughts about his long-lost daughter, and kills himself. Godwin felt that the theme would let readers assume that this somehow reflected on himself, and so he did not permit the novel to be published.