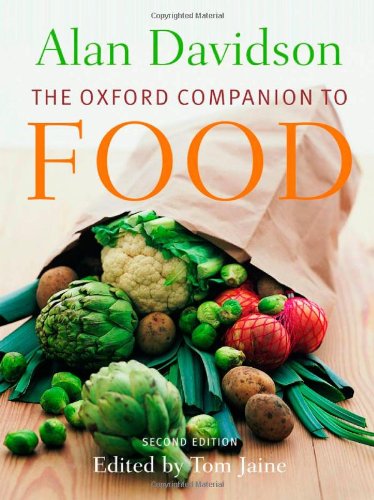 The Oxford Companion to Food by Alan Davidson, first published in 1999, became, almost overnight, an immense success, winning prizes and accolades around the world. Its combination of serious food history, culinary expertise, and entertaining serendipity, with each page offering an infinity of perspectives, was recognized as unique.

The study of food and food history is a new discipline, but one that has developed exponentially in the last twenty years. There are now university departments, international societies, learned journals, and a wide-ranging literature exploring the meaning of food in the daily lives of people around the world, and seeking to introduce food and the process of nourishment into our understanding of almost every compartment of human life, whether politics, high culture, street life, agriculture, or life and death issues such as conflict and war.

The great quality of this Companion is the way it includes both an exhaustive catalogue of the foods that nourish humankind - whether they be fruit from tropical forests, mosses scraped from adamantine granite in Siberian wastes, or body parts such as eyeballs and testicles - and a richly allusive commentary on the culture of food, whether expressed in literature and cookery books, or as dishes peculiar to a country or community.

The new edition has not sought to dim the brilliance of Davidson's prose. Rather, it has updated to keep ahead of a fast-moving area, and has taken the opportunity to alert readers to new avenues in food studies.

Alan Davidson's Oxford Companion to Food has been over 20 years in the assembling, but here it is; and it is superlatively worth the wait. In fact, superlatives fall silent. A huge and authoritative dictionary of 2,650 entries on just about every conceivable foodstuff, seasoning, cuisine, cooking method, historical survey, significant personage and explication of myth, it is supplemented by some 40 longer articles on key items. Davidson himself (no relation) contributes approximately 80% of the 2,650 entries, thereby guaranteeing high levels of erudition, readability and deadpan feline wit. Since this is a monument intended to last, nothing so frivolous as a recipe is included. A decision taken early in the development of the project to abjure issues whose significance is largely topical has also ensured an agreeable high-mindedness--nothing on those crucial but essentially dreary topics BSE and GM foods, for example.

If a fault could be found, it would only be that it's often difficult to read to the end of an entry, as the abundant cross-referencing all too easily sends one off to another entry, thence bouncing off to another, and all too soon the original is forgotten. A random alphabet of seductions might include: Aardvark, Botulism, Cup Cake, David (Elizabeth), Enzymes, Fat-Tailed Sheep, Gender/Sex and Food, Hallucinogenic Mushrooms, Ice Cream Sundae, Jewish Dietary Laws, Kangaroos, Lobscouse, Microwave Cooking, Norway, Offal, Puffin, Queen of Puddings, Roti, Scurvy, Termite Heap Mushroom (or Taillevant), Umeboshi, Vegetarianism, Washing up (a very elegant little article), sadly no X, Yin-yang and Zabaglione. As this might show, Alan Davidson's aim, borrowed from Dumas' great Grand Dictionnaire de Cuisine, that his work would appeal not only to persons of "serious character" but also those "of a much lighter disposition", is utterly fulfilled. --Robin Davidson

Alan Davidson's masterly encyclopaedia is the only reference book you need. (The Times)

Far more entertaining, addictive and idiosyncratic than any reference book has a right to be. (Christopher Hirst, The Independent)

There is no better way to stave off the winter blues than the second edition of Alan Davidson's The Oxford Companion to Food. Tom Jaine has taken over from the late Davidson and he is a worthy heir. This gem of food reference retains the wit, elegance, erudition and style that made the first edition so memorable. (Tom Parker Bowles, Mail on Sunday (Live - Night and Day))

No kitchen should be without The Oxford Companion to Food 2nd Edition. An absorbing culinary reference book, worth its weight in foie gras. (Image magazine Ireland,)

Extraordinarily comprehensive and detailed. As a reference book it is unlikely to be surpassed but it is also a fun book to dip into and every page includes masses of startling and original information. (Tom Jaine, Country Landowner Magazine)

The Oxford Companion to Wine - like the Food Companion it is detailed, scholarly and endlessly fascinating. (Tom Jaine, Country Landowner Magazine)

4. The Oxford Companion to Food