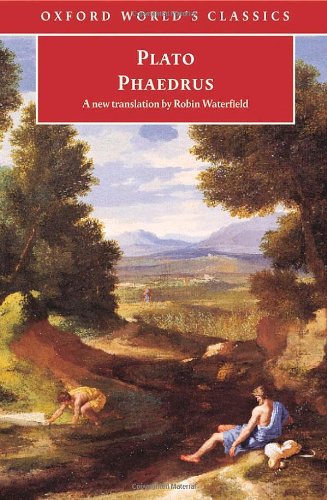 'Some of our greatest blessings come from madness Phaedrus is widely recognized as one of Plato's most profound and beautiful works. It takes the form of a dialogue between Socrates and Phaedrus and its ostensible subject is love, especially homoerotic love. Socrates reveals it to be a kind of divine madness that can allow our souls to grow wings and soar to their greatest heights. Then the conversation changes direction and turns to a discussion of rhetoric, which must be based on truth passionately sought, thus allying it to philosophy. The dialogue closes by denigrating the value of the written word in any context, compared to the living teaching of a Socratic philosopher. The shifts of topic and register have given rise to doubts about the unity of the dialogue, doubts which are addressed in the introduction to this volume. Full explanatory notes also elucidate issues throughout the dialogue that might puzzle a modern reader.

Robin Waterfield's translations include Plato's Republic, Symposium, Gorgias, Aristotle's Physics, Herodotus' Histories, Plutarch's Greek Lives and Roman Lives, Euripides, Orestes and Other Plays and The First Philosophers: the Presocratics and the Sophists. He is also the author of a biography of Kahlil Gibran.