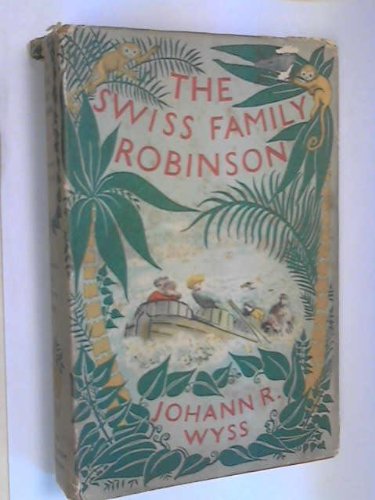 The novel opens with the family in the hold of a sailing ship, weathering a great storm. The ship runs aground on a reef, and the family learns the ship's crew has taken to a lifeboat and abandoned them. Subsequent searches for the crew yield no trace. The ship survives the night, and the family finds themselves within sight of a tropical island. The ship's cargo of livestock, dogs, guns & powder, carpentry tools, books, a disassembled pinnace, and provisions have survived. The family builds a raft, lashes livestock and the most valuable supplies to it, and paddles to the island, where they set up a temporary shelter. Over the next few weeks they make several expeditions back to the ship, to empty its hold, and harvest rigging, planks, and sails. They construct a small homestead on the island, and the ship's hull eventually breaks up in a storm and founders. The middle of the book is a series of vignettes, covering several years. The father and older boys explore various environments about the island, discover various (improbable) plants and animals, and build a large tree house, complete with a library. They also use the carpentry tools and local resources to build mechanical contraptions. Eventually, sailing the pinnace around the island's coast, they discover a European family hiding from local pirates. They adopt their daughter (who at first masquerades as a boy), and her father returns on a rescue mission, restoring the family's contact to the outside world.(Excerpt from Wikipedia)

A terrible storm strands a Swiss pastor, with his wife and four sons, on a tropical island. Luckily, the Robinsons are optimistic and inventive, and with what they salvage from the wrecked ship, and the island's abundant fruits, plants, and animals, they soon adapt--each day discovering new dangers, skills and delights in their strange new life.