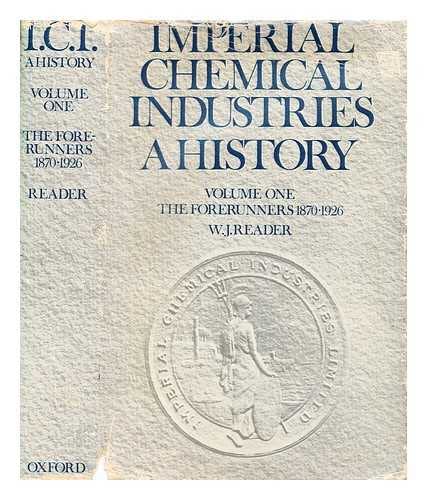 In 1965, the Board of Imperial Chemical Industries Ltd. commissioned a history of the Company. The author, an independent historian who has published a number of books on the industrial and social history of the nineteenth and twentieth centuries, has had free access to all sources of information in ICI's possession (and to many others) and ICI has exercised no form of censorship either over the presentation of the narrative or over the author's interpretation. Great corporations of the size and style of ICI are bound to be the subject of public concern and controversy; but controversy ought to be founded on fact, for otherwise all manner of mythology and prejudice will gain currency and respectability. This history was published in two volumes with the central them of the first volume (this one) being the rise of the four groups of companies (Brunner, Mond & Co. Ltd., Nobel Industries Ltd., The United Alkali Co. Ltd., and British Dyestuffs Corporation Ltd.) which in 1926, merged to form ICI. The narrative is designed to show why there was a merger and why it took one particular form rather than any of the others, which up to the last moment remained open. The second volume deals with the establishment of ICI in the world chemical industry from 1926-1952, the problems which faced it, its early organization, and its relations with other large chemical groups, especially in the USA and Germany. Volume 1 starts with the revolutionary changes which came over the chemical industry - in explosives, in alkalis, and in dyestuffs - during the ten years or so centred on 1870. The first three parts show how technological innovation destroyed old firms, built up new ones, and transformed the structure of each main branch of industry, in which elaborate arrangements were made for the development and regulation of world-wide markets. The growing interdependence of the explosives industry and the armaments industry, before the Great War, is described

Book Description Oxford University Press, 1970. Condition: Good. Shows some signs of wear, and may have some markings on the inside. Seller Inventory # GRP2977250

Book Description Oxford University Press, 1970. Condition: Fair. Volume 1. Book has been rebound.This book has hardback covers. Ex-library, With usual stamps and markings, In fair condition, suitable as a study copy. No dust jacket. Please note the Image in this listing is a stock photo and may not match the covers of the actual item,1400grams, ISBN:0192159372. Seller Inventory # 3802741

Book Description Oxford U.P, 1970. Condition: Good. A+ Customer service! Satisfaction Guaranteed! Book is in Used-Good condition. Pages and cover are clean and intact. Used items may not include supplementary materials such as CDs or access codes. May show signs of minor shelf wear and contain limited notes and highlighting. Seller Inventory # 0192159372-2-4

Book Description Oxford University Press, London, 1970. Hard Cover. Condition: Very Good (+). Dust Jacket Condition: Good (-). First Edition. No marks or inscriptions to contents. A very clean very tight copy with bright unmarked boards, minor bump to top of spine, very minor marking to a few page edges and no bumping to corners. Dust jacket not price clipped or marked with very small tears to well-rubbed edges. 563pp. This volume starts with the revolutionary changes which came over the chemical industry - in explosives, in alkalis, and in dyestuffs during the 10 years or so centred on 1870 and goes on to give the story of the rise of the four groups of companies - Brunner, Mond & Co. Ltd, Nobel Industries Ltd, The United Alkali Co. Ltd and British Dyestuffs Corporation Ltd. We do not use stock photos, the picture displayed is of the actual book for sale. Every one of our books is in stock in the UK ready for immediate delivery. Size: 9.5 x 6.5 inches. Seller Inventory # 012501