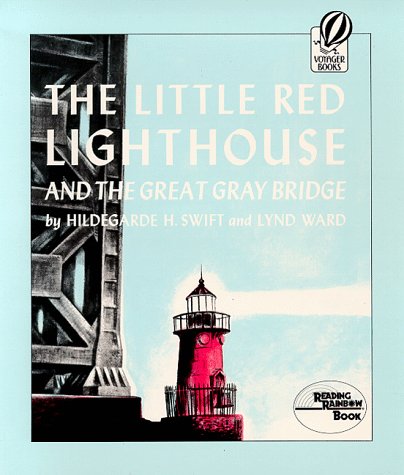 Built in 1921 of red steel and cast iron, the "round and fat and jolly" little red lighthouse was made famous for its bravery and faithfulness in this well-loved children's classic. The lighthouse was closed by the Coast Guard when the George Washington Bridge opened in 1932. In 1951 it was put up for auction, but because the public protested, it was turned over to the Parks Department instead, and then fell into disrepair. Its concrete base cracked; its doors were welded shut.

"There is just enough humanizing in the pictures--the intimation of a face on the tower, fog forming a grasping hand--to maintain the human spirit of the story and lead to its message: 'Each to his own place, little brother.' " --"New York Herald Tribune" "Such a picture-story book as Mrs. Swift and Mr. Ward have made between them will not only be deeply enjoyed by boys and girls ... but will help to cultivate in them the seeing eye, and make them sensitive to the beauty which they can so easily find around them." --"The New York Times"

HILDEGARD HOYT SWIFT (1890-1977) wrote several books for children. Best known for "The Railroad to Freedom," which was cited for a Newbery Honor in 1933, Ms. Swift spent her life recording the lives of heroic Americans on paper. "The Little Red Lighthouse and the Great Gray Bridge "is her most popular picture book.LYND WARD (1905-1985) illustrated more than two hundred books for children and adults throughout his life. Winner of the Caldecott Medal in 1952, for illustrating "The Biggest Bear," Mr. Ward created works that now can be seen in many museum collections throughout the United Staes and abroad.