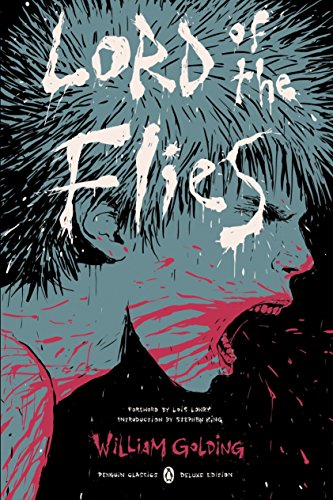 As provocative today as when it was first published in 1954, Lord of the Flies continues to ignite passionate debate with its startling, brutal portrait of human nature. William Golding's compelling story about a group of very ordinary boys marooned on a coral island has been labeled a parable, an allegory, a myth, a morality tale, a parody, a political treatise, and even a vision of the apocalypse. But above all, it has earned its place as one of the indisputable classics of the twentieth century for readers of any age. This Penguin Classics Graphic Deluxe Edition features an array of special features to supplement the novel, including a foreword by Lois Lowry, an introduction by Stephen King, an essay by E. M. Forster, an essay on teaching and reading the novel and suggestions for further exploration by scholar Jennifer Buehler, and an extended note by E. L. Epstein, the publisher of the first American paperback edition of Lord of the Flies. For more than seventy years, Penguin has been the leading publisher of classic literature in the English-speaking world. With more than 1,700 titles, Penguin Classics represents a global bookshelf of the best works throughout history and across genres and disciplines. Readers trust the series to provide authoritative texts enhanced by introductions and notes by distinguished scholars and contemporary authors, as well as up-to-date translations by award-winning translators.

"Lord of the Flies is one of my favorite books. I still read it every couple of years."
--Suzanne Collins, author of The Hunger Games trilogy

"I finished the last half of Lord of the Flies in a single afternoon, my eyes wide, my heart pounding, not thinking, just inhaling....My rule of thumb as a writer and reader--largely formed by Lord of the Flies--is feel it first, think about it later."
--Stephen King "This brilliant work is a frightening parody on man's return [in a few weeks] to that state of darkness from which it took him thousands of years to emerge. Fully to succeed, a fantasy must approach very close to reality. Lord of the Flies does. It must also be superbly written. It is."
--The New York Times Book Review About the Author:

William Golding was born in Cornwall, England, in 1911 and educated at Oxford University. His first book, Poems, was published in 1935. Following a stint in the Royal Navy during World War II, Golding wrote Lord of the Flies while teaching school. It was the first of several works, including the novels Pincher Martin, Free Fall, and The Inheritors and a play, The Brass Butterfly, which led to his being awarded the Nobel Prize for Literature in 1983.

Lois Lowry is the two-time Newbery Award-winning author of Number the Stars, The Giver Quartet, and numerous other books for young adults. Stephen King is the author of more than fifty books, all of them worldwide bestsellers. He is the recipient of the 2003 National Book Foundation Medal for Distinguished Contribution to American Letters and the 2015 National Medal of Arts. Jennifer Buehler is an associate professor of educational studies at Saint Louis University and President of The Assembly on Literature for Adolescents of the National Council of Teachers of English. E. M. Forster was an English writer best remembered for novels including Passage to India, Howards End, and A Room with a View. E. L. Epstein was a literary scholar and book editor who published the first American paperback edition of Lord of the Flies in 1959.

Lord of the Flies (Paperback or Softback)