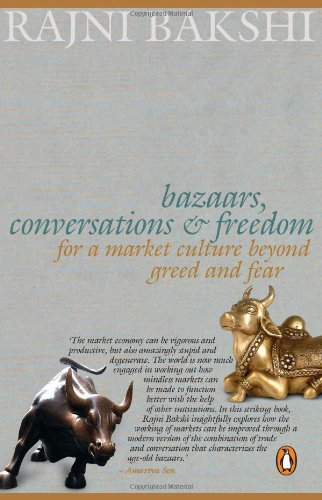 Long before the financial meltdown and the red alert on climate change, some far-sighted innovators diagnosed the fatal flaws in an economic system driven by greed and fear. Across the global North and South, diverse people - financial wizards, economists, business people and social activists - have been challenging the "free market" orthodoxy. They seek to recover the virtues of bazaars from the tyranny of a market model that emerged about two centuries ago. This widely praised book is a chronicle of their achievements.

From Wall Street icon George Soros and VISA card designer Dee Hock we get an insider critique of the malaise. Creators of community currencies and others, like the father of microfinance, Bangladesh's Muhammad Yunus, explore how money can work differently. The doctrine of self-interest is re-examined by looking more closely at Adam Smith through the eyes of Amartya Sen. Mahatma Gandhi's concept of 'Trusteeship' gathers strength as the socially responsible investing phenomenon challenges the power of capital. Pioneers of the open source and free software movement thrive on cooperation to drive innovation. The Dalai Lama and Ela Bhatt demonstrate that it is possible to compete compassionately and to nurture a more mindful market culture.

This sweeping narrative takes you from the ancient Greek agora, Indian choupal, and Native American gift culture, on to present-day Wall Street to illuminate ideas, subversive and prudent, about how the market can serve society rather than being its master. In a world exhausted by dogma, Bazaars, Conversations and Freedom is an open quest for possible futures.

This fully updated and revised UK version of the 2009 Vodafone Crossword Book Award winner for non-fiction is a rare and epic narrative about those who have been quietly forging solutions and demonstrating that a more compassionate market culture is both possible and desirable.

The market economy can be vigorous and productive, but also amazingly stupid and degenerate. The world is now much engaged in working out how mindless markets can be made to function better with the help of other institutions. In this striking book, Rajni Bakshi insightfully explores how the working of markets can be improved through a modern version of the combination of trade and conversation that characterizes the age-old bazaars. Amartya Sen --Amartya Sen

At a time when so much of our world still operates in silos, to the detriment of the integrated thinking and action we so desperately need, Rajni is a bridge-builder, a connector, a catalyst ... Bazaars, Conversations and Freedom beautifully illustrates [her] ability to move between worlds, to bring the best of the traditional world into the modern, and vice versa ... I am impressed by the accuracy of her historical research and her ability to link past, present and future ... But here is a guide to the underlying philosophies that sustain and drive some of the deepest and potentially most transformative leaders of our time. It ranges across very different worlds and very different agendas, but in the process it cross-pollinates and holds out the promise of exactly the sort of hybrid vigour that we now so urgently need. Over to you. John Elkington --John Elkington

Rajni Bakshi has been writing extensively about social and political movements in India for the last three decades. Her articles have appeared in a wide range of English and Hindi newspapers and magazines. She was awarded the Homi Bhabha Fellowship in 2000. Rajni went to school in Kingston, Jamaica and later studied at Indraprastha College (Delhi), George Washington University (Washington, DC) and Rajasthan University (Jaipur). She is associated with the Centre for Education and Documentation, Citizens for Peace (CfP) and Child Rights and You (CRY).

Book Description Condition: Good. A+ Customer service! Satisfaction Guaranteed! Book is in Used-Good condition. Pages and cover are clean and intact. Used items may not include supplementary materials such as CDs or access codes. May show signs of minor shelf wear and contain limited notes and highlighting. Seller Inventory # 0143064916-2-4

Book Description Paperback. Condition: Fine. Item is in like new condition with minor shelf wear. Might have a remainder mark or slight wear from sitting on the shelf. Seller Inventory # DS-0143064916-1