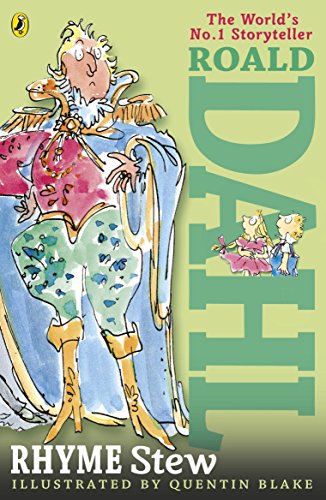 A collection of irreverant rhymes featuring characters from fairy tales, fables and nursery rhymes - as you've never seen them before! From the tortoise and the hare and Hansel and Gretel to Ali Baba and Aladdin, these traditional stories will never seem the same again once you have had a taste of Roald Dahl's hilarious verse and Quentin Blake's suitably lively illustrations.

An inventive collection for older children and adults alike, Rhyme Stew bubbles over with Roald Dahl's extraordinary humour and imagination.

An utterly inedible collection of poems, rhymes and verse illustrated by Quentin Blake for older children

Roald Dahl was a spy, ace fighter pilot, chocolate historian and medical inventor. He was also the author of Charlie and the Chocolate Factory, Matilda, The BFG and many more brilliant stories. He remains THE WORLD'S NUMBER ONE STORYTELLER.

Quentin Blake has illustrated more than three hundred books and was Roald Dahl's favourite illustrator. In 1980 he won the prestigious Kate Greenaway Medal. In 1999 he became the first ever Children's Laureate and in 2013 he was knighted for services to illustration.