Items related to Diary of a Wimpy Kid - 6 copy slipcase 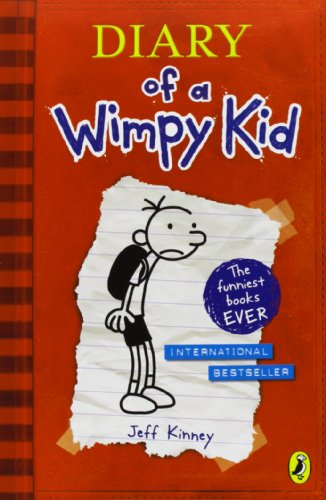 The Diary Of A Wimpy Kid (Box Set) contains five books from the Diary Of A Wimpy Kid series. The books are not given in any particular order. They follow the story of a boy, Greg Heffley, and his struggles in school. In the first book, The Diary Of A Wimpy Kid, Greg faces a new year in a new school where the good kids and the bullies have to share the same space, and Greg is happy to have his sidekick, Rowley, for company. Things take a new turn when the not-so-cool Rowley becomes quite popular. Greg and Rowley's friendship is tested when the former tries to manipulate the situation to his advantage, and when Rowley claims sole credit for a comic strip that he created with Greg, called Zoo-Wee-Mama. Their clashes lead to some hilarious instances. In the second book, Rodrick Rules, it is time for a new school year and a new journal for Greg. Things start off on the wrong note as Greg is forced to attend swimming classes, wear swimming briefs, and walk all the way home daily after practice, all thanks to Rodrick. As desperate as Greg is to keep things hush-hush and put a humiliating incident from the summer behind him, he realizes that Rodrick knows his secret. Greg now has his work cut out for him, trying to keep his embarrassing secret from coming out into the open, and keeping his somewhat-cool reputation from sinking. In the third book, The Last Straw, Greg's Dad is hell-bent on toughening him up. Greg somehow manages to wiggle out of every manly activity planned for him, but when the term 'military academy' crops up, he knows he's in some serious trouble. When his Dad is convinced that Greg should attend military school during his vacation, Greg tries to make the best of his remaining time to gather memories that he will cherish during the summer.

Jeff Kinney is a #1 New York Times bestselling author and a five-time Nickelodeon Kids' Choice Award winner for Favorite Book. Jeff has been named one of Time magazine's 100 Most Influential People in the World. He is also the creator of Poptropica, which was named one of Time magazine's 50 Best Websites. He spent his childhood in the Washington, D.C., area and moved to New England in 1995. Jeff lives with his wife and two sons in Massachusetts, where they own a bookstore, An Unlikely Story.