Items related to Geronimo Stilton: The Phantom of the Subway (#11)

Stilton, Geronimo Geronimo Stilton: The Phantom of the Subway (#11)

Geronimo Stilton: The Phantom of the Subway (#11) 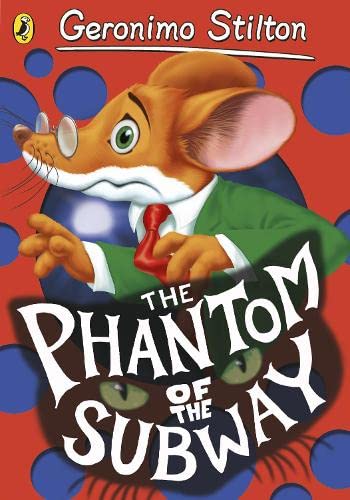 Geronimo Stilton has taken the world by storm! Funny and adventurous stories with colourful, engaging text design from the UK publishers who brought you Diary of a Wimpy Kid. Perfect for both avid and reluctant readers of 5+

Phantom of the Subway

A ghost is haunting New Mouse City's subway tunnels! Geronimo's whiskers are trembling with terror but he's determined to get the scoop for The Rodent's Gazette. He musters his courage and sets off to investigate but he's in for the fright of his life - the ghost is a cat!

Phantom of the Subway

Who is Geronimo Stilton? That's me! I run a newspaper, but my true passion is writing tales of adventure. Here in New Mouse City, the capital of Mouse Island, my books are all bestsellers! My stories are full of fun - tastier than Swiss cheese and tangier than extra-sharp Cheddar. They are whisker-licking-good stories, and that's a promise!

Book Description Paperback. Condition: Very Good. The book has been read, but is in excellent condition. Pages are intact and not marred by notes or highlighting. The spine remains undamaged. Seller Inventory # GOR006639045

Book Description Paperback. Condition: Good. The book has been read but remains in clean condition. All pages are intact and the cover is intact. Some minor wear to the spine. Seller Inventory # GOR009506358

Book Description Puffin, 2014. Paperback. Condition: Used; Good. **Simply Brit** Shipped with Premium postal service within 24 hours from the UK with impressive delivery time. We have dispatched from our book depository; items of good condition to over ten million satisfied customers worldwide. We are committed to providing you with reliable and efficient service at all times. Seller Inventory # 1519696

Book Description Puffin, 2014. Paperback. Condition: Used; Good. **SHIPPED FROM UK** We believe you will be completely satisfied with our quick and reliable service. All orders are dispatched as swiftly as possible! Buy with confidence! Aloysius Ihezie. Seller Inventory # 3280081