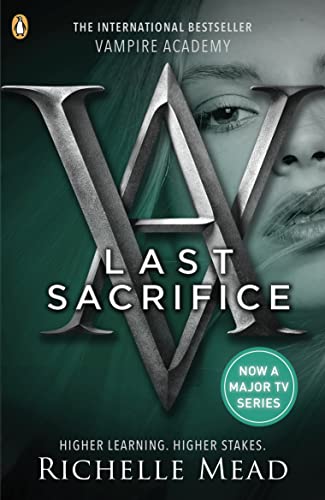 Rose is on trial for high treason and the death of Queen Tatiana. Someone is trying to frame her and it looks like even Dimitri might not be able to save her now.

Richelle Mead is the bestselling author of the Vampire Academy, Bloodlines and Age of X series. Her love of fantasy and science-fiction began at an early age when her father read her Greek mythology and her brothers made her watch Flash Gordon. She went on to study folklore and religion at the University of Michigan, and, when not writing, Richelle spends her time drinking lots of coffee, keeping up with reality TV, and collecting 1980s T-shirts. Richelle lives with her family in Seattle in the USA.
www.richellemead.com

Book Description Paperback. Condition: new. Paperback. this series is a New York Times bestseller. The final heart wrenching episode at St Vladimir's Academy, a fantastically commercial combination of school and vampires, a guilty pleasure read. Over a million and a half copies have been sold already in its native America, and its release will e accompanied by a blanket marketing scheme. Shipping may be from multiple locations in the US or from the UK, depending on stock availability. Seller Inventory # 9780141331881

Book Description Paperback / softback. Condition: New. New copy - Usually dispatched within 4 working days. Rose Hathaway is awaiting wrongful execution and there exists only one man who can stall this terrible fate. Rose must look to both Dimitri and Adrian, the two great loves of her life, to find him. Seller Inventory # B9780141331881