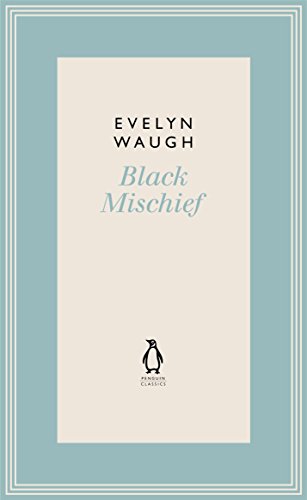 Part of the fabulous new hardback library of 24 Evelyn Waugh books, publishing in chronological order over the coming year. The books have an elegant new jacket and text design.

'We are Progress and the New Age. Nothing can stand in our way.' When Oxford-educated Emperor Seth succeeds to the throne of the African state of Azania, he has a tough job on his hands. His subjects are ill-informed and unruly, and corruption, double-dealing and bloodshed are rife. However, with the aid of Minister of Modernization Basil Seal, Seth plans to introduce his people to the civilized ways of the west - but will it be as simple as that?

Evelyn Waugh was born in Hampstead in 1903. His first novel, Decline and Fall, was published in 1928 and it was soon followed by: Vile Bodies (1930), Black Mischief (1932), A Handful of Dust (1934) and Scoop (1938). He travelled extensively, served in the Royal Marines and the Royal Horse Guards and continued to write, winning many prestigious literary awards. Brideshead Revisited was first published in 1945. Evelyn Waugh died in 1966.

Book Description Penguin Classics, 2011. Hardcover. Condition: Good. Good condition is defined as: a copy that has been read but remains in clean condition. All of the pages are intact and the cover is intact and the spine may show signs of wear. The book may have minor markings which are not specifically mentioned. Most items will be dispatched the same or the next working day. Seller Inventory # wbb0014451752