Items related to Quantum of Solace (A format)

Quantum of Solace (A format) 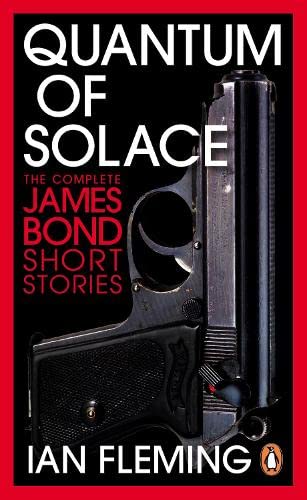 Beautiful girls. Crime lords. Assassins. Deadly secrets ...
It's all in a day's work for Bond.

Whether he's making an unexpected discovery in the Bahamas, hunting down a Cuban hit-man in wild country, smashing an international drugs ring in Rome, on the trail of a murderous secret in the Caribbean, enjoying New York's special pleasures or foiling a surprisingly alluring assassin in Berlin's sniper's alley, dangerous missions and seductive women come with the job for James Bond. And this agent is always a consummate professional.

Bringing together all of the James Bond short stories in one volume for the first time, this is the ultimate celebration of suave and deadly secret agent 007.

From a View to a Kill

For Your Eyes Only

The Property of a Lady

Ian Fleming was born in 1908 and educated at Eton. After a brief period at the Royal Military Academy at Sandhurst, he went abroad to further his education. In 1931, having failed to get an appointment in the Foreign Office, he joined Reuters News Agency. During the Second World War, he was personal assistant to the Director of Naval Intelligence at the Admiralty, rising to the rank of Commander. His wartime experiences provided him with a first-hand knowledge of secret operations.

After the war he became Foreign Manager of Kemsley Newspapers. He built his house, Goldeneye, in Jamaica and there at the age of forty-four he wrote Casino Royale, the first of his novels featuring Commander James Bond. By the time of his death in 1964, the James Bond adventures had sold more than forty million copies. Dr No, starring Sean Connery, was released in 1962 and the Bond films continue to be huge international successes. He is also the author of the magical children's book Chitty Chitty Bang Bang.

The novels of Ian Fleming were immediately recognised as classic thrillers by his contemporaries Kingsley Amis, Raymond Chandler and John Betjeman. With the invention of James Bond, Ian Fleming created the greatest British fictional icon of the late twentieth century.