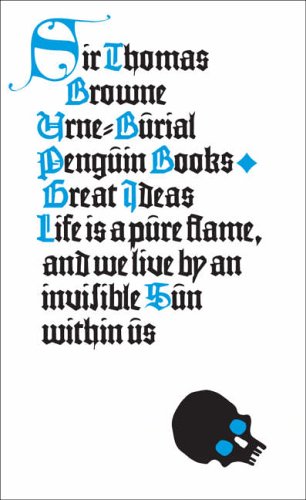 Throughout history, some books have changed the world. They have transformed the way we see ourselves - and each other. They have inspired debate, dissent, war and revolution. They have enlightened, outraged, provoked and comforted. They have enriched lives - and destroyed them. Now Penguin brings you the works of the great thinkers, pioneers, radicals and visionaries whose ideas shook civilization and helped make us who we are.

Written after the discovery of over forty Bronze Age burial urns in seventeenth-century Norfolk, Sir Thomas Browne's profound consideration of the inevitability of death remains one of the most fascinating and poignant of all reflections upon the vanity of mankind's lust for immortality.

Thomas Browne was an English author and physician, who was born in London in 1605 before being educated at Oxford and travelling on the Continent. His Religio Medici, in which Browne attempted to reconcile science and religion, was written in around 1635 and he was knighted by Charles II in 1671. Browne died on his seventy-seventh birthday in 1682.