Items related to Alistair Cooke's American Journey: Life on the... 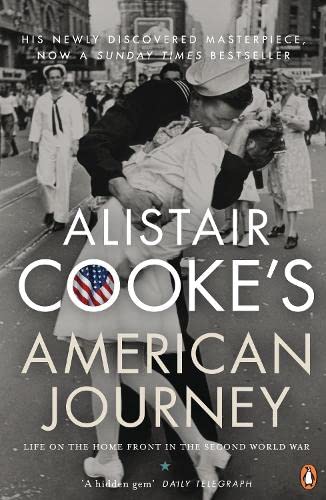 Alistair Cooke's American Journey: Life on the Home Front in the Second World War is an extraordinary travelogue, celebrating the spirit of a nation that would inspire Cooke's legendary broadcasts for the next sixty years.

Within weeks of the Pearl Harbor attack in 1941, Cooke set off to see the effects of the war on ordinary Americans, from miners to lumberjacks, Pullman porters to peanut farmers and even Japanese-Americans interned in stark desert prison camps.

Thought to have been lost for years, this enthralling account of Alistair Cooke's travels through American during the Second World War was rediscovered just before his death.

'So vivid ... he makes you feel you were there'
John Humphrys

'A time capsule ... containing the essence of a vanished America'
Independent on Sunday

'Cooke's mellifluous radio voice flows from every page ... an account of one man's love affair with an entire country. Every stop on the way glints like a facet on a diamond'
Gavin Esler

Alistair Cooke (1908-2004) enjoyed an extraordinary life in print, radio and television. The Guardian's Senior Correspondent in New York for twenty-five years and the host of groundbreaking cultural programmes on American television and of the BBC series America, Cooke was, however, best known both at home and abroad for his weekly BBC broadcast Letter from America, which reported on fifty-eight years of US life, was heard over five continents and totalled 2,869 broadcasts before his retirement in February 2004, far and away the longest-running radio series in broadcasting history.

Alistair Cooke, then a Washington correspondent for "The Guardian", recognized a great story to be told in investigating at first hand, the effects of the Second World War on America and the daily lives of Americans as they adjusted to radically new circumstances. Within weeks of the Pearl Harbor attack, Cooke set off with a reporter's zeal on a circuit of the entire country to see what the war had done to people. He talked to everyone he encountered on his extensive trip, from miners to lumberjacks, to war-profiteers, to day-laborers, to local politicians - even the unfortunate Japanese-Americans who had been rapidly interned in stark, desert camps. This unique travelogue celebrates an important American character and the indomitable spirit of a nation that was to inspire Cooke's reports and broadcasts for some sixty years.

Alistair Cooke was born in Manchester in 1908 and educated at the universities of Cambridge, Yale and Harvard. Throughout his long career he worked as a journalist and broadcaster for many different organizations including the BBC, The Times and the Guardian, and won numerous awards for his work.