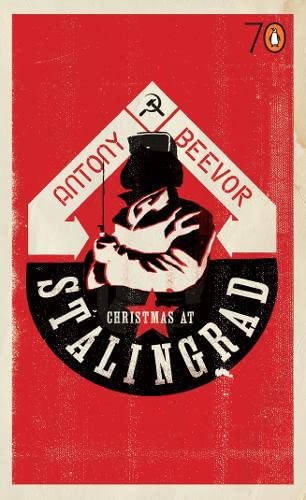 Antony Beevor's Stalingrad, published by Penguin in 1998, was a worldwide bestseller, telling one of the most harrowing stories of the Second World War and reminding everybody of the power of narrative history in the hands of an expert storyteller. In Christmas at Stalingrad, Beevor takes us back to December 1942 when the German 6th Army was surrounded by the Russians and facing annihilation. Only thoughts of Christmas kept German soldiers' hopes alive.

Hitler made two fundamental and crippling mistakes during the Second World War. The first was his whimsical belief that the United Kingdom would eventually become his ally, which delayed his decision to launch a major invasion of Britain, whose army was unprepared for the force of blitzkrieg warfare. The second was the ill-conceived Operation Barbarossa--an invasion of Russia that was supposed to take the German army to the gates of Moscow. Antony Beevor's thoughtfully researched compendium recalls this epic struggle for Stalingrad. No-one, least of all the Germans, could foretell the deep well of Soviet resolve that would become the foundation of the Red Army; Russia, the Germans believed, would fall as swiftly as France and Poland. The ill-prepared Nazi forces were trapped in a bloody war of attrition against the Russian behemoth, which held them in the pit of Stalingrad for nearly two years. Beevor points out that the Russians were by no means ready for the war either, making their stand even more remarkable; Soviet intelligence spent as much time spying on its own forces--in fear of desertion, treachery and incompetence--as they did on the Nazis. Due attention is also given to the points of view of the soldiers and generals of both forces, from the sickening battles to life in the gulags.

Many believe Stalingrad to be the turning point of the war. The Nazi war machine proved to be fallible as it spread itself too thin for a cause that was born more from arrogance than practicality. The Germans never recovered, and its weakened defences were no match for the Allied invasion of 1944. We know little of what took place in Stalingrad or its overall significance, leading Beevor to humbly admit that "[t]he Battle of Stalingrad remains such an ideologically charged and symbolically important subject that the last word will not be heard for many years". This is true. But this gripping account should become the standard work against which all others should measure themselves. --Jeremy Storey

'Captivating . . . Jingoistic statues never pay a proper tribute to the dead, but honest books, like this one, certainly do' (Vitali Vitaliev Guardian)

A superb re-telling. Beevor combines a soldier's understanding of war's realities with the narrative techniques of a novelist . . . This is a book that lets the reader look into the face of battle (Orlando Figes Sunday Telegraph)

Antony Beevor's account of this historic turning-point is truly powerful, written with a compelling narrative drive . . . This is a fine achievement (David Pryce-Jones Daily Mail)