Items related to Gods Without Men 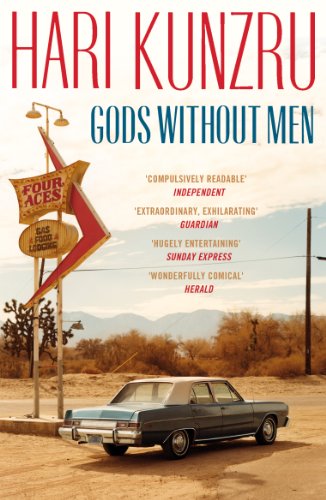 Gods Without Men is Hari Kunzru's epic novel of intertwined lives and a vast expanse of American desert.

In the Californian desert . . .

In a remote town, near a rock formation known as The Pinnacles, lives intertwine, stories echo, and the universal search for meaning and connection continues.

'Extraordinary, smart, innovative, a revelation. Has the counterculture feel of a late-1960s US campus hit - something by Vonnegut or Pynchon or Wolfe. Genuinely interesting and exhilarating. Extremely enjoyable' Guardian

'Astonishing, mind-blowing. One of the most original novels I've read in years' Counterpunch

'One of the most socially observant and skilful novelists around. Consistently gripping and entertaining' Literary Review

'A great sprawling narrative, as vast as the canvas on which it is written' Washington Post

'Reverberates long after you finish reading it' New Yorker

Hari Kunzru is the author of the novels The Impressionist, Transmission, My Revolutions and Gods Without Men, and the story collection Noise. He lives in New York.

Extraordinary . . . smart and innovative . . . Kunzru is conspicuously clever and talented . . . a revelation . . . interesting and exhilarating . . . a virtuoso performance . . . funny and ingenious . . . This clever and extremely enjoyable novel deserves to be popular not just with hippies, students and other questing types, but also with more sceptical audiences (Guardian)

The literary skills of Hari Kunzru are evident throughout this complex and disturbing novel . . . beautifully constructed sentences . . . A brilliant crossover literary feat . . . Careful readers will find Kunzru himself is something of a trickster (Annie Proulx)

Consistently atmospheric . . . Richly detailed . . . For all the wit, this is a dark portrait of modern morals . . . Kunzru tenderly teases out the humanity, to powerful emotional effect (GQ)

Psychological acuity, a wonderful linguistic precision and the ability to make beautiful accordance between form and content via thoughtful narrative experiment. Gods without Men is a step further along the road towards the full realisation of Kunzru's early promise. It makes undeniable the claim that he is one of our most important novelists . . . As large and cruel and real as life . . . Never less than entertaining (Independent on Sunday)

With each novel, Hari Kunzru is proving himself a subtler and more ingenious writer . . . his most ambitious work yet (Scotland on Sunday)

Gods Without Men is a dazed, erudite and unforgettable novel (David Mitchell)

Kunzru's gift for satire remains undimmed . . . Kunzru has already established himself as one of the most socially observant and skilful novelists around. In Gods Without Men, he has raised his game still further, creating a mature, intricately balanced fiction that is consistently gripping and entertaining (Literary Review)

A funny, beautifully observed novel that raises big questions about how far events and people, past and present, are connected. But for all the big ideas, it is also surprisingly moving (Psychologies)

Dizzying scope . . . It is a testament to Kunzru's ability as a writer that Gods Without Men presents so many characters sketched so vividly (New Statesman)

Kunzru's gift for the plain craft of prose, [and the wilful idiosyncrasy that] has shaped this sprawling, multi-stranded novel (Metro)

Hari Kunzru is the author of the novels The Impressionist, Transmission, My Revolutions and Gods Without Men, and the story collection Noise. He lives in New York and his next novel, White Tears, will be published by Hamish Hamilton in spring 2017.