Items related to Danny the Champion of the World (Abd): Dramatisation...

Danny the Champion of the World (Abd): Dramatisation (Puffin audiobooks) 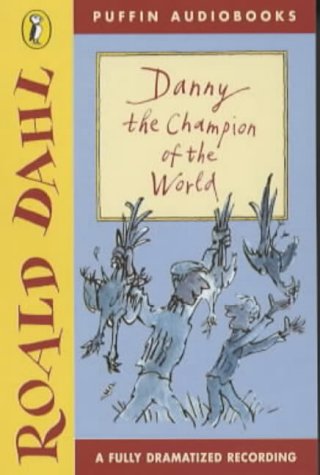 This book is about a most private and secret habit my father had, and about the strange adventures it led us both into.... Danny thinks the world of his father, who has looked after him ever since his mother died when Danny was just four months old. But as he grows up, Danny discovers that his father's secret spells adventure and trouble for both of them!

: "My father, without the slightest doubt, was the most marvellous and exciting father any boy ever had". Danny feels very lucky. He adores his life with his father, living in a gypsy caravan, listening to his stories, tending their gas station, puttering around the workshop, and occasionally taking off to fly home-built gas balloons and kites. His father has raised him on his own, ever since Danny's mother died when he was four months old. Life is peaceful and wonderful ... until he turns 9 and discovers his father's one vice. Soon Danny finds himself the mastermind behind the most incredible plot ever attempted against nasty Victor Hazell, a wealthy landowner with a bad attitude. Can they pull it off? If so, Danny will truly be the champion of the world. Danny is right up to Roald Dahl's impishly brilliant standards. An intense and beautiful father-son relationship is balanced with subtle escapades that will have even the most rigid law-abider rooting them on. Dahl's inimitable way with words leaves the reader simultaneously satisfied and itching for more. (Ages 9 to 13) --Emilie Coulter

"This is one of the great (and very few) books about a boy's love for his father, told in a non-sentimental way." (Michael Rosen S Magazine, Sunday Express)

"A triumph. It is the most beguiling book . . . and wildly, hilariously funny. If ever a book were for all the family, this is it" (Evening Standard)