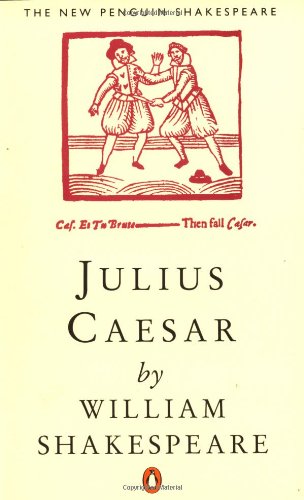 In this striking tragedy of political conflict, Shakespeare turns to the ancient Roman world and to the famous assassination of Julius Caesar by his republican opponents. The play is one of tumultuous rivalry, of prophetic warnings--"Beware the ides of March"--and of moving public oratory "Friends, Romans, countrymen!" Ironies abound and most of all for Brutus, whose fate it is to learn that his idealistic motives for joining the conspiracy against a would-be dictator are not enough to sustain the movement once Caesar is dead.

One of Shakespeare's most political plays, Julius Caesar continued Shakespeare's interest in Roman history, first developed in Titus Andronicus. Drawing on Plutarch, the great historian of Rome, Shakespeare dramatises one of the most crucial moments in Roman history--the assassination of Julius Caesar. Loved by the Roman crowd but increasingly feared by the Senators, Caesar increasingly shows signs of his desire to abolish the Republic and crown himself emperor. A conspiracy is hatched, led by Cassius and Brutus, who murder Caesar on the steps of the Capitol. Mourning over his dead friend's body, Mark Antony gives one of the famous rhetorical speeches in literature, asking "Friends, Romans, Countrymen" to lament Caesar's death, privately vowing to "let slip the dogs of war" against those who have shed Caesar's blood. Antony joins forces with Caesar's son Octavius to defeat Cassius and Brutus in battle, and establish an uneasy alliance whose collapse is dramatised in Shakespeare's later play Antony and Cleopatra. Written at the end of Queen Elizabeth's reign, Julius Caesar has been seen by many as a radically pro-Republican play which sailed close to the political wind of the time. --Jerry Brotton