Items related to The Christmas Books: A Christmas Carol; The Chimes;...

Charles Dickens The Christmas Books: A Christmas Carol; The Chimes; The Cricket on the Hearth (Penguin Popular Classics)

The Christmas Books: A Christmas Carol; The Chimes; The Cricket on the Hearth (Penguin Popular Classics) 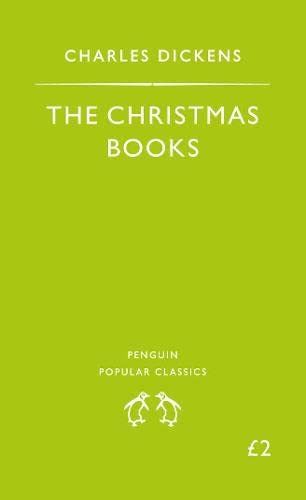 Dickens’s story of solitary miser Ebenezer Scrooge, who is taught the true meaning of Christmas by a series of ghostly visitors, has proved one of his most well-loved works. Ever since it was published in 1843 it has had an enduring influence on the way we think about the traditions of Christmas. Dickens’s other Christmas writings collected here include ‘The Story of the Goblins who Stole a Sexton’, the short story from The Pickwick Papers on which A Christmas Carol was based; along with shorter pieces drawn from the ‘Christmas Stories’ that Dickens wrote annually for his weekly journals. In all of them Dickens celebrates the season as one of geniality, charity and remembrance.

Charles Dickens was born at Portsmouth on 7 February 1812. He received little formal education, but taught himself shorthand and became a reporter of parliamentary debates for the <I>Morning Chronicle</I>. He began to publish sketches in various periodicals, which were subsequently republished as Sketches by Boz. <I>The Pickwick Papers</I> were published in 1836–7 and after a slow start became a publishing phenomenon and Dickens's characters the centre of a popular cult. He began <I>Oliver Twist</I> in 1837, followed by <I>Nicholas Nickleby</I> (1838) and <I>The Old Curiosity Shop</I> (1840–41).After finishing <I>Barnaby Rudge</I> (1841) Dickens set off for America; he went full of enthusiasm for the young republic but, in spite of a triumphant reception, he returned disillusioned. His experiences are recorded in <I>American Notes</I> (1842). <I>Martin Chuzzlewit</I> (1843–4) did not repeat its predecessors' success but this was quickly redressed by the huge popularity of the Christmas Books, of which the first, <I>A Christmas Carol</I>, appeared in 1843. During 1844–6 Dickens travelled abroad and he began <I>Dombey and Son</I> while in Switzerland. This and <I>David Copperfield</I> (1849–50) were more serious in theme and more carefully planned than his early novels. In later works, such as <I>Bleak House</I> (1853) and <I>Little Dorrit</I> (1857), Dickens's social criticism became more radical and his comedy more savage. Charles Dickens died on 9 June 1870.